Out Of Her Hands 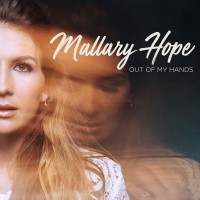 NASHVILLE-based singer/songwriter Mallary Hope will be releasing her debut full-length album after numerous singles. The 17-track album, 'Out Of My Hands', is described as "seeing the Georgia native in her rawest form, with themes of identity and self-worth woven through each inspired song." Said Mallary, "Our worth and identity are not rooted in what we do. Our worth and identity are rooted in God and who he created us to be."