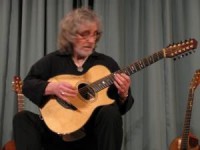 SINGER Carol Lee Sampson (who in the '90s made many worship recordings as half of Carol & Colin Owen) and songwriter Martin Green are featured on the latest album by folk music icon Gordon Giltrap. 'Peace Will Fall' is released on Angel Airand is a repackage of the album originally issued in 2011 as 'Echoes Of Heaven'.