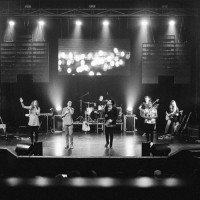 AFTER TWO successful albums, 'Thunder' (2015) and 'Hands High' (2017), New Zealand's Equippers Revolution are planning a new live album and have also gone back into the studio to record a new version of one of their most popular tracks, "Hands High". It is now being released in Portuguese as "MÃ£os Para o CÃ©u".