Tennessee's I Am Spartacus make a big hipster statement 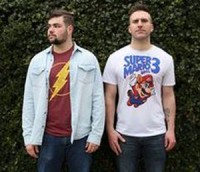 THE DUO I Am Spartacus, from Greenbrier, Tennessee, whose music is claimed to have "harmonies reminiscent of the Beach Boys and melodies that dance off the tongue like raindrops on rooftops," have released the single "Nobody Wants To Be A Hipster". The band have previously released five singles and four EPs.