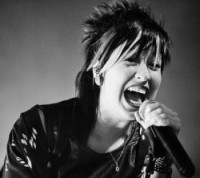 NEW LABEL RockFest will be releasing this summer the debut solo album 'Red For War' by female rock singer Zahna. The singer, real name Suzy Martinez, rose to prominence with the popular recording and touring band Ilia. In 2017, Zahna released her first single "Underneath".