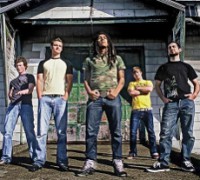 THE MICHIGAN-based metal band Besieged, which once featured vocalist Mattie Montgomery before he moved on to stardom with For Today, are having a track from their 10-year-old album 'Atlantis' released in a remastered version. The song "INRI" has been given a studio update by the band's drummer Josh Schroeder. Asked whether or not he was embarrassed about the 'Atlantis' album Montgomery responded, "[I'm]'totally not embarrassed about this. This album is so much better than the first For Today album. The second too, honestly."