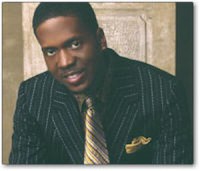 GRAMMY-winning artist, songwriter, choir director and producer Donald Lawrence has reunited with The Tri-City Singers, the ensemble who gave Lawrence his first major hit in 1993, 'A Songwriter's Point Of View'. The single "Goshen 432 Hz" has been released and is being called "a powerful call of protection, love, peace and safety all over the world with the voices of Lawrence and the Carolina-based Singers and featured soloist Sheri Jones-Moffett on the song. . . [Lawrence] tuned the song to 432 Hz, referring to a frequency that is widely considered a spiritual and sacred tuning, based on historical findings from early instruments of biblical times, with a lower pitched tone that is also said to be more calming and peaceful."