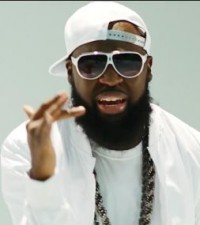 FLORIDA-based rapper Brinson will release on 26th April his ninth solo project, 'Reversing Tomorrow'. Read a press release, "While you may not comprehend exactly what that title means, the message inside Brinson's ninth solo project is (and remains) abundantly clear: The creator of the universe loves us so much that he provides a miraculous plan of salvation through belief in the life, death, and resurrection of Jesus the Christ, his one and only Son."

For more on Brinson visit the Brinson artist profile