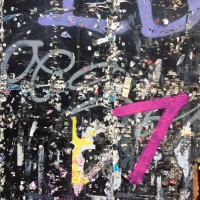 THE ONE-TIME lead singer of Indigoecho who in the early 2000s had three Cross Rhythms radio hits, Clive Parnell, has just released '7', a seven-song solo mini-album. Said Parnell, "'7' draws on the indie influences I've enjoyed over the years nodding back to the '80s initially and Joy Divison and the Coteau Twins." The project contains two songs Parnell has co-written with David Lyon and a cover of Audrey Assad's "I Shall Not Want".