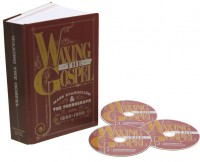 Some of the first recordings ever made of religious music, including cylinder recordings made in the Victorian era by the hugely influential vocalist Ira Sankey, have been issued in a three CD box set, 'Waxing The Gospel: Mass Evangelism And The Phonograph 1890-1900.' The CDs are issued by Archeophone Records with a 408 page hard back book. The Red Lick catalogue wrote that the set featured "more than 100 super-rare tracks including all known recordings by revivalists Dwight L Moody and Ira D Sankey, the Bison City Quartette, J W Myers, Charles Taylor & His Two Daughters, Grace Marvin, Baldwin's Cadet Band and many more."