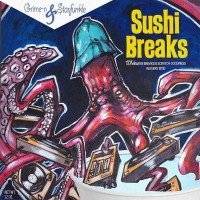 HIP-HOP label Illect Recordings and DJ Because have assembled a limited edition 7 inch break record Grime-n & Starfunkle's "Sushi Break". A press release describes it as a 7" break record "chock full of original sounds and samples not used on previous break albums, plus original sounds from one of hip-hop's legendary emcees and producers, Fab Five Freddy. This gives the DJ a whole new tool box of scratch to paint their sound canvas with. 'Sushi Breaks' also features all new beats for scratching and juggling with, produced by an international array of renowned hip hop producers."