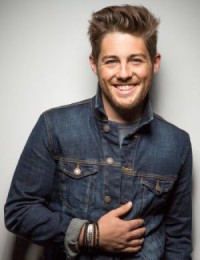 POP ARTIST Austin French, who was once the runner-up to Josh Groban on the ABC TV talent search, Rising Star, and subsequently served as a worship pastor in Delray Beach, Florida, has released a single "Wide Open" through Fair Trade Services. The song was inspired by Austin and his wife Joscelyn's fight to adopt their son. Said French, "That day I learned first-hand that some of the best things God has for us we may never even see coming our way. Fighting for that sweet little baby boy was the hardest thing we have ever walked through and was not a part of my plan, but I wouldn't trade him for anything. Society teaches us that we hold the key to our destiny - that it's up to us to make a life worth living, but I believe it's the opposite. It's when we lay our life down that we begin to discover the life God has for us. Because my wife and I were willing to jump into the unknown with our hands and hearts 'wide open' we watched God do miracles in front of our eyes. God rescued a little baby boy and gave him a future, a family, and hope."