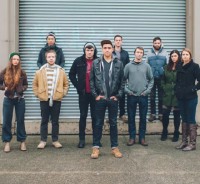 RADICAL worship collective Kings Kaleidoscope and award winning rapper Andy Mineo have collaborated for a single. Reported the Rapzilla website, "Kings Kaleidoscope and Andy Mineo teamed up for a jazzy, funky and at times a bit reggae song called 'The Beauty Between'. KK is known for their funky, experimental and sometimes controversial take on worship music. A lot of their musical arrangements over the years have been hip-hop infused so it's refreshing to actually hear a rapper over one."