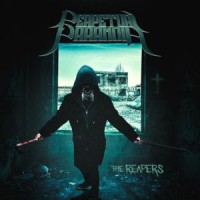 ON 20TH AUGUST America's Retroactive Records will be releasing the album 'The Reapers' by Perpetual Paranoia. The group features Dale Thompson, best known as the frontman of renowned Christian metal band Bride, and Brazilian Tiago James de Souza, best known as the guitarist of Bay Area thrash metal band Hand Of Fire. The CD is described as "a journey of thrashy aggression and darkness."