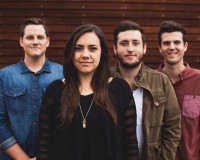 THE POP rock band from Orange County, California For All Seasons, having released the single "Higher" in July, have followed through with another, "Bigger Than" in August. Speaking about the latter song the band's lead singer Emily Hamilton explained how the song was inspired by her struggle with anxiety. "What I started to realise is that my responsible, have-it-all-together mentality was just masking all of this fear that I had underneath. So, it all came out in this panic attack that I had and it started me on this journey of having to really face the fact that I was struggling with a lot of fear in my life. It's been a huge song for me personally. It is just this very clear statement of who God is. He is bigger than anything I'm afraid of. He is bigger than my dreams. I don't have to stress and get anxious about my future because, if I believe the word of God where he says his plans for me are better than what I could imagine or dream of, then I don't have anything to worry about."