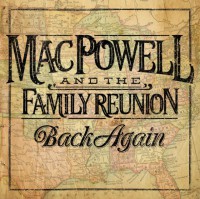 THE SOUTHERN roots and American rock band Mac Powell & The Family Reunion, whose 'Back Again' album is to be released on 26th July, have issued a single from the project, "Whoo!". The track features country music hitmaker Craig Morgan, who has enjoyed seven Top Ten country singles, including 2004's "That's What I Love About Sunday", 2005's "Redneck Yacht Club" and 2009's "Bonfire".