Singles and forthcoming album by Wilder Woods have Needtobreathe connection 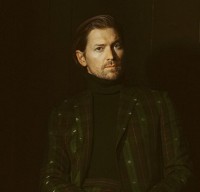 THE LEAD singer of Platinum-selling Southern rockers Needtobreathe, Bear Rinehart, has announced that he is Wilder Woods, who in April released two songs, "Someday Soon" and the R&B flavoured "Sure Ain't". Reinhart chose the name Wilder Woods because of his young sons' Christian names, Wilder aged three and one-year-old Woods. The debut Wilder Woods album is due out in August on Atlantic Records. When "Sure Ain't" was initially released, Rinehart wrote on his Wilder Woods Instagram that the song is about "that innocent and playful type of flirtation. It's about the ongoing chess match when you're trying to let someone know that you're into them, but leave the ball in their court to make the next move. It's about maintaining confidence and swagger while giving the other person the chance to have it their way." Speaking about the forthcoming album, which will be in a different musical direction from his work with Needtobreathe, Reinhart said, "This music represents a new direction and something totally fresh for me. So I wanted to find a producer [Gabe Simon, of the Nashville indie-rock band Kopecky] that I had never worked with before who could match that energy."