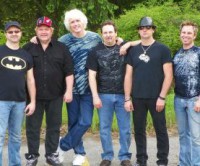 THE CHRISTIAN parody band from Pittsburgh, Pennsylvania, ApologetiX, have released the album 'Xit Ego Lopa'. Read a band statement, "Though the phrase is unfamiliar to most people 'exit ego lopa' means 'back to the beginning'. It's a fitting title for our 50th CD in 25 years which feels like the completion of a cycle. . . Of course we hope to be back with more parodies on a 51st CD and are already beginning to record them". 'Xit Ego Lopa' contains such tracks as "No Exclusions" (Alice In Chains' "No Excuses"), "You Might Stink" (The Cars' "You Might Think") and "Once You See Truth, You Can't Unsee It" (REM's "What's the Frequency, Kenneth").