So, are you adventurous? Up for a small challenge? Then why not consider doing a sponsored event and help support the work of Cross Rhythms as you do?

Or simply give your support and encouragement to those who are taking on such a challenge and sponsor them.

Here are some past Sponsored Events that took place on behalf of Cross Rhythms: 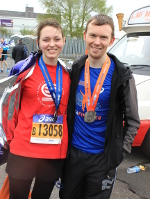 On April 6th 2014 Cross Rhythms presenters Chris and Emily completed the Manchester Marathon as a team, running half each.

Emily said "I really enjoyed doing the marathon. It was one of the most challenging things I have done. It was a really great day! I loved doing it in aid of Cross Rhythms and I chose to run as I wanted to give something back, as I have learnt so much from Cross Rhythms and want to see others impacted just as I have been by the work that they do."

On May 10th 2014 Cross Rhythms CEO Jonathan Bellamy, Maxine Cummings and Jess Critchley abseiled down the world's tallest abseil tower to raise funds for Cross Rhythms! Located in Northampton, at 418 feet (127m) it is nearly half the height of The Shard (the tallest skyscraper in Western Europe)!

Maxine said: "When asked if I would 'abseil for Cross Rhythms' I hardly hesitated, even though I'd never abseiled before. I wanted to do my part in helping to raise funds for the radio station/website as I believe in their vision to 'reach millions for Christ' and music is such an accessible way to do this."

Jess said: âWhen I was asked if I wanted to join in with the abseil I wasn't going to turn down such a great opportunity. The abseil itself I really enjoyed and knowing that the money I had raised was going towards the amazing work that Cross Rhythms does, meant I was blessed to be a part of the team that day. I encourage others to do as I did, it's a lot of fun and you get the chance to sow into Godâs work.â

And on 5th July 2014, 15 year-old Sam Critchley abseiled the same tower to raise money for Cross Rhythms. He said, âI chose to abseil, because providing alternative ways of teaching about Christianity is an important thing, and I think that Cross Rhythms does something unique for people, and is great at doing so!"

Jon said: âSince the early days of Cross Rhythms I have always wanted to do something to help raise the profile of a radio station which encourages and challenges people through media and training. So on 27th April on a very damp and dreary morning myself and my daughter (Stef) took on this challenge. The prominence of the beacons, could probably be linked to how I feel about the work of Cross Rhythms. In times gone by, and even now on special occasions, fires would be lit to send signals to others the length and breadth of the land. In the same way Cross Rhythms sends a great and important message to all who listen, whether locally or throughout the world on the Internet. In my opinion, if only a dozen other listeners did something to fundraise for Cross Rhythms, this could raise quite a substantial sum, and inform others about the work that this ministry does.â

4. DO YOUR OWN CHALLENGE FOR CROSS RHYTHMS

What can you do? It might be a parachute jump, a swim across a lake, a cup cake sale or even a sponsored silence! If you would like to raise money for Cross Rhythms, then please email supporter[dot]services[at]crossrhythms[dot]co[dot]uk and we will give you all the administrative help you need.