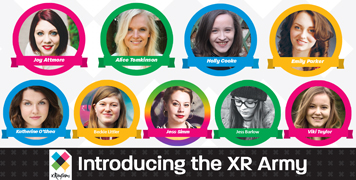 Click here to meet the first nine of the xRhythms Army. And find out why they exist below…

âWhat One Generation Tolerates, The Next Generation Will Embrace!â

John Wesley uttered these words over 200 years ago, but sadly they are worryingly relevant to our nation today. We mustnât be ignorant of the world we have given our teenagers to grow up in. And we must consider our responsibility to them in this hour. Please would you spend a couple minutes with me to understand something of what shapes the soul of our teenage generation?…

Take a look at BBC Threeâs headline programmes. This channel, aimed at a youth generation, is a clear barometer of what is seen to be relevant and appropriate for todayâs teenagers. Of 20 shows, hereâs your viewing options:

Or watch the documentary from Radio One, BBCâs most teenage targeting platform, entitled âBritainâs Young Witchesâ; where presenter Alice Levine looks at the growing number of young people in the UK involved in witchcraft.

Although presented as an investigation, in reality it is more an advert, an enticement into a mysterious, tantalising lifestyle. Thereâs no investigation into the negative effect of witchcraft; no stories of those whose lives have been destroyed by giving themselves to darkness and the demonic.

Is this not concerning? Through such programming, teenagers are being sold the lie that becoming a witch and learning how to build an altar, make up potions and cast spells, is just another lifestyle choice, as harmless as being vegetarian!

John Wesley was right! In our day a generation are being sacrificed into morally and spiritually destructive lifestyles by an older generationâs rejection of Godâs truth and a willful empowering of un-Godly values.

But like pouring water into a flimsy balloon, many in this teenage generation cannot handle this mess of un-Godly values and they are being ludicrously stretched or worse, theyâre emotionally bursting.

Mental health issues in the young are rocketing. Depression, hopelessness, issues over identity and worth…Already, so many cannot cope, trying to express their pain through things like self harm and suicide. In America, results announced this month found that â36% of all teens were thinking about planning or attempting suicide in 2015, an increase of 32% since 2009.â And, â87% of Year 12 girls who used social media every day were 14% more likely to be depressed than those who used social media less frequently.â

And that is the wind that is fanning the flames of destructive lifestyles for todayâs young - social media…the internet, YouTube, Instagram, Snapchat, Facebook. To quote from âBritainâs Young Witchesâ: âThanks to social media, witchcraft is no longer a myth but a movement…The hashtag âWitches Of Instagramâ has been used hundreds of thousands of timesâ

This young lady, just one of those witches, can currently boast a staggering 578,000 subscribers to her YouTube channel! What influence! Compare this with the UK church, where the most teenage engaging Christian music group has just 12,500 YouTube subscribers, and one of the most influential UK youth ministries has under 12,000. Boy, have we lost a lot of ground!

But take that ground back we must! And at Cross Rhythms we align with and are fuelled by the words of Jeremiah 31:16: âYour children will return from the land of the enemy!â

Weâre not content to allow them to be destroyed by lies. We believe that Father God has plans, purpose and destiny for them. That they can be a generation who donât just suffer because of the sins of their fathers. Rather, they will âtaste and see that the Lord is goodâ and run after Him with all their heart. And our new God-given vision, xRhythms, is the perfect vehicle to encourage this.

Through a dedicated website, YouTube channel, and unique Visual Radio Player, xRhythms will pour relevant Christian truth into the social media world of 13-20 year olds. After years of hard work and building the vision, xRhythms is now live here. Videos, blogs, interviews and programs are being written, produced, and added daily. Exciting partnerships with other youth ministries are also forming to produce specialist content for the teenagers. And, Iâm thrilled to say, the first of an army of young media missionaries are now being drawn together: young people in their 20âs who are sold out for God, passionate for His truth, and desperate to share it with a generation. See more about contributors here.

God has the strategy and power to redeem this generation, and xRhythms is part of it. Would you stand with us in this exploit God has called us to? Weâve raised over 50% of our launch target but we still need a further Â£52k for video cameras, editing computers and other equipment. Plus to give regular support to that army of media missionaries we need a much bigger army of Friends whoâll give Â£25 a month. Could you help?

It may be a giant mountain, but we only need faith the size of a mustard seed! It may seem to need huge resource, but itâs amazing what God can do with a few loaves and fish! So, would you add your prayers and your faith to ours, and would you give what resource you can, to get behind our xRhythms army and help contribute to the resurrection of a generation?