London hip-hop crew 29TH CHAPTER are going all out to take the Jesus message into schools. Tony Cummings talked to the righteous rappers. 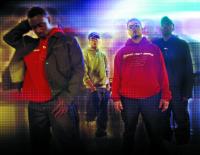 Agreat deal has happened to London hip-hop crew 29th Chapter in the last 12 months. Their critically acclaimed debut EP 'History' has been released, they've been namechecked in Billboard magazine, the band have appeared on stage and on CD with The Tribe, and with every passing month the group's vision to take the message of Jesus into schools takes more shape. In January 2004 the band take their biggest leap of faith - going full time. Leader of the crew Mr Prince (otherwise known as Prince Laryea) spoke about the band's passion to see young lives changed. "Our vision is to take the Gospel message into schools using urban arts and to see a generation of young people changed and transformed. Our heart is for young people to get the same vision that we have, the same vision of Jesus, the same vision of a God who is powerful and not only able to meet their needs, but to challenge and transform their lives and the lives of their friends and their peers.

"We're setting up a project in London, it's called the Nu School project and what we're doing is we're getting in association with school's teams in London and trying to bring them together with bands, other acts, media people, creative arts people... to take the Gospel into schools. We're looking to set that up as a trust, as a charity and we're really just asking people to get behind that. On 29th November at Ealing Christian Centre in London we have the launch of Nu School, at an event called UK Urban Vibe. It's in West London and we've got ourselves playing, the Tribe will be down there bangin' some hits from 'Raise Your Game'. We've also got a house and garage crew called AFG Nexus and also a young B-boy, a beat-boxer, rapper who's on the way up, his name is B-mused."

Prince has been rapping since 1994 when he was half of a West London duo called Set Apart with lyricist James Morson, now better known as The Navigator. In 1998 they met another rapper, Yinka, who was doing street work in the Harlesden area. By 1999 the three guys were doing a lot of gigs together and began to talk about the possibility of creating a collective of rappers to share the Christian faith with Britain's youth. Yinka came up with the name Acts 29. The group began to connect up with a Birmingham-based producer Dave "Dangerous" Plumb while at Soul Survivor the group spotted a young Irish breaker, Kevin "Gladiator" McGlade. With Yinka easing down on his hip-hop commitments to become an assistant pastor at his church, by the summer of 2001 Mr Prince, The Navigator, Dangerous and Gladiator were operating as Acts 29. Their debut recording the single 'Born Again Believers' got a rave review in Cross Rhythms and extensive airplay on Cross Rhythms radio. Changing their name, to avoid confusion with the Portland, Oregon-based group Acts 29, the crew relaunched as 29th Chapter with prestigious trade magazine Billboard highlighting the group's debut EP 'History'.

Explained Navigator, "The whole idea of 'History' is just like the title track of the album, we just have a heart that God is gonna make us history makers, just like the disciples in the book of Acts. Those men turned the world upside down and that's what our heart is, our passion is that we want to leave a legacy where they look back in history books and see that the 29th Chapter brought the Gospel to their nation and beyond. Each of the tracks on the EP talk about different aspects of who we are as a crew and just things that we believe. There's tracks on there to challenge Christians, there's tracks on there that just preach the Gospel - like 'Representative' is just a clear description of who we see the Lord Jesus as and 'Double Negative' challenges the Christians who are living a double life. I believe there's something for everyone there, but it's just a beginning, something awesome and astronomical - large sized proportions!"

Studio wizard Dangerous is very aware that 29th Chapter have a battle on their hands in convincing the more traditional people in the Church of the validity of a Christian ministry based on hip-hop music. "I think that generally you'll find that hip-hop is not greatly accepted by an older generation, but I think that something that God has really favoured us in is the fact that, although hip-hop is the way that we live and it's our style of music really at the forefront of our music is the message which is the Gospel, which transcends any form of music and is in itself the most important message that we bring. So we find that wherever we go actually people are very positive about what we're doing because they realise that beyond the culture that they might not understand and beyond maybe the baggy jeans and the hats, in fact there are four young men that just want to preach the Gospel of Jesus.

"I think really that what transcends from the 29th Chapter is that although we really love the music and it's really part of our lives, what we love more is Jesus and his Gospel message. I think that really is what transcends through the music, and we find that actually people accept things a lot more than generally you think that they would accept it. Yes, we've had times where people just don't see what we're trying to do and just hear in their ears kind of noise, but at the end of the day the Gospel will find a way to be relevant to the street and to be relevant to the culture for young people, so really we believe that's what God has blessed us in."

TC: I've got with me today 29th Chapter, one of the latest of the wave of Christian hip-hop groups which the underground in Britain has raised up in the last few years. It's really good to be talking to the guys here and I'm going to let each band member introduce themselves in turn and explain what their function in the band is - starting with the gentleman on my left. You're called Prince I understand.

MR PRINCE: "Indeed, indeed - aka Mr Prince of the 29th Chapter, that's me. Also known as the Captain of the squad, blazing it for Jesus, hip-hop all the way baby!"

DANGEROUS: "My name is Dangerous, I rap with the crew and also handle the phat production and the phat beats."

GLADIATOR: "My name is Gladiator aka McGladus. I'm lyricist with the crew and also the crews B-boy breaker representing moves on the floor, dropping into the heavy beats produced by Dangerous."

NAVIGATOR: "And this is the Navigator, I just rap."

TC: Well, with such a profound pedigree before me I feel instantly awed. You're listening to TC the scribe of the saints. Now I really would like to ask you guys to give me a potted history of the band. We did that once before, right back in the early days when you had a different name. Prince, could you just give me that history lesson again and bring it a bit more up to date.

hey i seen you guys last nyt in the odyssey it was so klass! i think wot you do it amazing n i loved the dancin. id love 2 do the same thing but we'l see what god has planned :)
god bless jade -x-x-

Hi
Watched you in Sea Mills, thought you were great, gonna get your CD.
Keep up the good work, i ll be looking out for you in the future.
Take care
Lou x

it's me just to say i hope that the tour is going well
,but God is with you been on ya website and heard that your going to America.
Sounds cool keep doin a great job and more people
see how cool God and turn to him because of wat he gave u