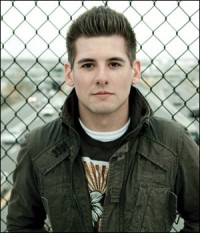 The formularised nature of much modern radio music is, judging from the internet's message boards and fan blogs, a matter of considerable irritation to some music buffs. But what often gets overlooked in the heated debate is that it takes a great deal of skill and effort to make music that is inherently "radio friendly". The album 'The Rescue' by Adam Cappa has just been released in the UK through Kingsway and will be, for some rock and pop critics, too stylised, too similar to Daughtry, Kris Allen (Adam even has the same finely chiselled good looks) or Jeremy Camp to get much praise. Also, the fact that it was Mr Camp who helped land Adam his record deal with BEC Recordings will be perceived as more proof that this Indiana-raised singer/songwriter is a creative clone created for Top 40 radio. But such a jaundiced view ignores the songwriting craft and richly powerful vocals evident on 'The Rescue' or the deep desire to minister spiritual truth reflected in all Adam's songs.

Adam M Cappa was born on 29th October 1985 in Richmond, Indiana. It all started when Adam, reared Catholic with no knowledge of Christian music, got very involved with Young Life meetings at high school after accepting Christ as his Lord and Saviour. Adam met two leaders there who took the time to invest in him and showed him Christ's love by how they lived their lives. It just so happened one of them also played guitar and sang. "I bought a little Austin guitar for $180," recalled Adam. "I watched and played literally unplugged behind the band. I tried to copy them. Then I started to write some songs. They were horrible!"

While lifeguarding during his senior year, Adam's neighbour introduced him to youth pastor Greg Boyce. "Greg saw something in me that I hadn't recognised yet. He pushed me to be a leader and understand God's gifting in my life, gave me opportunities to lead and introduced me to the music of Chris Tomlin and Matt Redman. I had no idea this existed." Finally Greg surprised Adam by telling him he had booked him to lead worship at a youth camp. Without knowing how to handle a week like that, Adam, wanting to share his passion for Christ, grabbed his guitar and said "yes." "I didn't know anything else to do but be completely honest about where I was with Christ and what I was struggling with as I led the camp. I wasn't much older than the kids and I think I was able to relate to them and communicate in an authentic way."

That first camp led to a second, and the invitations began to pour in. Adam began to work alongside Greg in church ministry. He explained, "I felt called to pursue this full-time; I sold my car, bought a van and took it step by step." As Adam walked through one door, another would open. Eventually he opened the door to a studio where he began his first recording alongside a recent friend he had made through his travels - recording icon Jeremy Camp. The resulting independent album 'Carry Me' was released in 2007.

"I learned from that first album with Jeremy," said Adam. "He began to sow into me. We stayed in touch and built this relationship over the last four years." In 2009 Adam released a second independent project 'Love Driven'. AAdam took up his story. "After I started working with a booking agency, I opened one night for Jeremy. After the set, he and his guys embraced me; and I found out he had been praying about my ministry. So we prayed about it together and felt like God was saying 'go.' That's when we started writing together for 'The Rescue'." Signed to BEC Recordings the label released 'The Rescue EP' and were rewarded with almost immediate Christian radio airplay.

The subsequent album, with its blatantly Top 40 feel, complete with loops and back tracking, was produced by Camp and Andy Dodd who spent three months praying, writing and recording with Adam. Said Adam, "I feel like the messages on this recording reflect who I am as a person. I'm just a messed up dude and sinner coming to terms with my own brokenness and repenting from that. When you write, you kind of search your own heart. Each of these songs kind of searched a different depth of my heart. The process was super-fast to me, but it was a great experience to write alongside guys who blow my mind when they write. They are so accomplished, and I want to learn."

One of those learning moments for Adam was when Jeremy brought the idea for the song "What's At Stake" to the studio. Said Adam, "It grabbed my heart immediately, challenging me to think about the people whom we surround ourselves with daily - friends, family, people we pass. We know something is going on with them. Maybe they are hurting. Maybe their eternity is at stake. We know something's going on, but we don't say anything. Do we not care enough? It's their lives. That's what's at stake. When I think about the people I love the most, I wanna take every opportunity I have to speak the love of Christ to them and not miss the chance to show his love."

One of the melodic ideas that Adam had is in "The Rescue", a soul-searching tune. "It reminds me of moments when I am drowning in my life, crying, 'Jesus, rescue me from this,' but I'm afraid to step out and trust God. I often think I can make it on my own strength. I am desperate to be rescued by a Saviour. I remember thinking about Peter when Jesus asked him to walk on water. He took his eyes off Jesus and started to sink and cried to be rescued. It's that desperation when we cry to be rescued, 'We need you so much, God, we don't wanna lose sight but we do. Help us not to do that.'"

Things are today progressing very well for the songsmith. 'The Rescue' has reached 22 in the US Christian charts and Adam is currently touring the US with his newly formed band. And though he might sound a little like Daughtry or Kris Allen in one way he is very different from the TV talent search stars. Confessed Adam, "Ministry is my heartbeat. Whatever that looks like, that's my heartbeat. My life was changed in high school. I wanna see others' lives changed, and I pray that God expands my opportunity to do ministry."