London gospel singer ADELAIDE MACKENZIE recently released her first single and is now working on an album. She spoke to Tony Cummings. 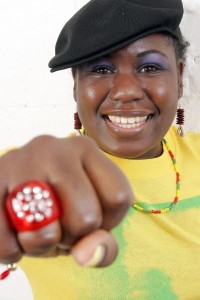 These days gospel divas are as likely to come from Chesterfield as Chicago and the fact that one of the newest on the scene, Adelaide Mackenzie, is a South London girl born and bred shouldn't be too much of a surprise. Adelaide's first release, the "He Gives Me More" single, has created quite a lot of interest with several radio stations giving it play and Adelaide appearing recently on God TV. During a visit to the Cross Rhythms HQ, I asked the 28 year old singer to fill me on her background.

Growing up in Brixton Adelaide went through a lot of difficult times. Having had a Sunday school upbringing she found herself calling out to God in her pain and distress. She remembered, "It was in 2000, after I went through a broken relationship, I had lots of spiritual dreams. It was like I was going mad and I even had a spiritual attack. I started to pray and read the Bible and I felt such a peace. My mum started to find her spiritual rooting again too. She started to go to church and wanted to take me too. I was like, 'I do not want to go to church.' I absolutely despised it. I hated going into the traditional church wearing a scarf on my head. But then I went to Ruach Ministries at the beginning of 2000 and everything changed!

"I knew that I wanted to be baptised but I knew that once I started the walk I'd better not go back to where I was which was to lying, stealing, sleeping around. I got the revelation of Christ, especially when I got baptised. I'd say that was the best thing I'd ever done, as soon as I went under the water, this heavy weight from the front of my head just went. I was just like 'Yippee!' Even now the same troubles come but at least I can praise, I can laugh and I have such a peace. At one time I would have been crying about this and shouting at people."

Adelaide had always shown a musical gifting. She became adept at covering the hits of the day from Madonna to Debbie Gibson and Alexander O'Neil. She even recorded some R&B independently which was never released. After joining Ruach, the famed church founded by Bishop John Francis she found herself in a different kind of musical environment. Adelaide sang first with the Ruach choir and then Ruach's praise and worship team. She said, "I've been doing that for about three years. It's just been a great development in my walk of divine destiny."

Adelaide began songwriting and one of the songs she wrote, "He Gives Me More", caused a bit of a stir when she sang it at Ruach. She remembered, "Bishop was like ' love it! I'm going to produce it!'" But Bishop Francis was very busy. Then God opened a door and I recorded it with Struggs, which is short for struggles." The track, produced by Milingo and Otis Kirton, immediately began to attract attention, even being nominated for a GEM Award before its official release! Now Adelaide is hard at work on her debut album. "The album we've been working on is called 'Daily Process' and it's talking about real circumstances, about me coming from the streets and going straight back to where God has called me from but at least I don't have to do the things that I used to do. The song starts, 'Do you think I wouldn't try to live holy?/Do you think I would not lift up my voice when he's given me a power of choice?'"

hey yo music is hottt!!! and caught a glimpse of your testimony, just thought i should check out your my space, i will be hosting the upcoming GRIME event (God Reigns In ME) at leytonstone and thought it would be cool to have an idea of the Powerful woman of God i'll have the pleasure of introducing, stay blessed.

i like adelaide i think she is call calling singer. i luv her too. God bless her.