After The Fall: The Midlands-based rock evangelists 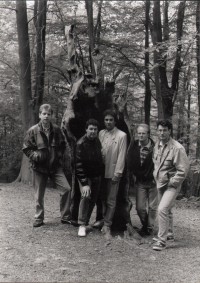 Last year Nuffsed had the honour. This year it fell to Midlands AOR team After The Fall to compose the theme tune to Cross Rhythms '94, "Touching Glory". The band are about to record the song and three others at Walsall's Stairway Music and will have the EP out in time for the festival.

Ten years ago Ian Stott, singer, guitarist and songwriter with After The Fall, would have laughed at the thought of 'touching glory' in fields of Devonshire. In his younger days Ian was only interested in the football field. He was no mere spectator mind you. He spent some time as a semi-professional playing at centre half for Redditch and Rugby Town in the old Southern League. Oddly enough, After The Fall's drummer, Mike Cartwright did considerably better by playing full time for Notts County and Coventry City.

Meanwhile, Ian became a Christian in 1982. Within a couple of years he was repairing the bridge on his old acoustic guitar. It had remained unplayed for years but as Ian says, "God gave me a song." It was to be the first of many. Ian shared his songs with a small circle of friends who included lead guitarist Russell Smith and bass player Nigel Hale. They played together purely for their own amusement with no thoughts of becoming a band. That all changed when they were asked to play at a concert. By that time Mike had joined them on the drums together with keyboard player Richie Jenkins. They were originally called Sonrise, but, as Ian quips, "We soon changed it as it sounded like a double glazing window firm!" Renamed After The Fall the band today still has every one of its founding members.

I asked Ian to tell me what sort of characters the rest of the band are like. He alleges that synth player Richie is the hyperactive member and percussionist Mike is the band's resident joker though ex-biker Nigel is the guy with the driest sense of humour south of the Spaghetti Junction. Russell, the guitar player, beats them all when it comes to modesty. Ian recounts, "We were on holiday together when we had a go at clay pigeon shooting. Russ amazed the guy in charge by getting near perfect results. It turned out that our Clint Eastwood was a country-shooting champion in his youth. Talk about keeping things quiet, that's him all over," says Ian. Despite their varying temperaments Ian insists, "We get on fabulously well in the band and God certainly knew what he was doing when he brought us together." People are quick to comment about the way ATF are able to have a good laugh at a gig despite the importance of what they are doing for God.

Ian is concerned that Christians can be reticent about declaring their faith in public. "Even the gay community are not ashamed to stand up for what they believe. Yet so many Christians seem ashamed of Jesus," comments Ian. In pub gigs After The Fall will happily use cover versions of hits alongside their gospel material, but wherever they play, evangelism is bound to be prominent... True, they now chat less between numbers but that's because they are confident that the lyrics speak for themselves.

Five years ago the band recorded a privately financed tape 'Into The Light'. Yet though it was a year in the making, the album is by lan's own admission "musically scarred and a labour of persecution". The band did not always see eye to eye with the producer and were particularly unhappy with the percussion tracks. Happily 500 copies sold in the West Midlands and beyond and proved to be a blessing to many and that, for the band, was what mattered most.

With their hard-rocking, anthemic hook-laden music ATF are becoming increasingly popular with a teenage audience, despite the band being no spring chickens. Many teenagers, Ian finds, are surprisingly open to the gospel. "They may know little or nothing about Jesus but at least they are prepared to give a fair hearing," Ian tells me. The lyrics of one of ATF's songs puts it succinctly, "Satan is the cancer - Jesus is the answer."

TOUCHING GLORY
by Ian Stott
The world is waiting for the sons of God to be revealed
All creation groans until that day appears
The dawn is breaking, when the darkness fades, the morning star will rise
At the radiance of the Son all heaven cries
The Spirit moves all across the land, touching those who will receive
And when he lights the flame, the fire will blaze again
In the hearts of those who believe

Chorus:
Touching glory, hands are rising to the Son
We're touching glory, the spirit moves and we are one
The king will not delay, he will lead us on our way
And we will stand one day... touching Glory

The great awakening, as the sleeping giant stirs, the world's redeemed
Young and old will have their visions and their dreams
The earth is shaking as the battle rages for the souls of men
There will be no peace until he comes again
The Spirit moves right across the and, touching those who will receive
And when he lights the flame, revival stirs again
Reaching those who will believe
Â© Copyright 1994 Light Song