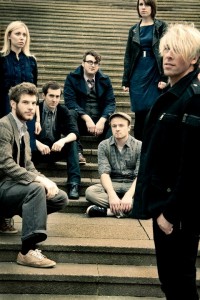 Brighton-based singer/songwriter Paul Oakley is, of course, a composer whose worship songs have connected with the world Church. "Jesus Lover Of My Soul", "Who Is There Like You", "Because Of You" and "Be Lifted Up" have all made it onto the CCLi chart while "Jesus Friend Of Sinners" was even used in the Harrison Ford feature film The Wrong Element. But now the singer/guitarist has startled Christian music industry observers by momentarily turning his back on worship ministry to front a rock band already making some headway in the mainstream. The self-titled debut by Alamein's Torch has already produced one Cross Rhythms turntable hit with "Bullet Proof" with cuts like "Let It Go" sure to follow. Rich Crosby and Tony Cummings threw Paul some questions about his new initiative.

Paul: I've felt stirred for years that our worship music is like a foreign language to those outside the Church. Also, I've grown quite tired of and frustrated by the serious limitations of what has almost become a praise and worship 'genre'. My heart from the word go has always been aware of those on the outside. I've felt challenged for a while to write something that anyone outside of our faith can really identify with, and yet at the same time stir questions and hopefully a hunger for truth and for spiritual reality as well as extend the hope of mercy and restoration.

Rich: Does this feel like a big leap from what you've been doing?

Paul: I think it's a very natural leap and a real response in that surely part of our worship to God is to reach out to those around us. Musically it's been a real growth experience for me. Before it felt like there were strict parameters on what I could write and the form and melody and structure and so on. But when I started to try writing for this project it was literally like a blank canvas. No rules. No limits. No constraints. It was almost like I had to learn a new language musically and in the way I wrote lyrics but I've absolutely loved it and feel much more creatively fulfilled by the challenge.

Tony: A few years ago I saw you and a band do a non-worship set at Nth Fest in Yeovil. Was that the beginning of what is now Alamein's Torch? 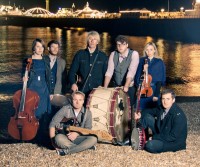 Paul: That would have been The Shoots... No, that was nothing to do with Alamein's Torch although I guess it was the beginnings of me writing for a band context as opposed to writing for 'congregations'!

Tony: Tell me a bit about the growth of Alamein's Torch.

Paul: It grew out of the whole writing and recording process. As we added parts to the arrangement and found the right people to play on the album it naturally followed for them to be a part of the band, with the possible exception of the whole string quartet! We already had Cat singing and playing cello on the album so she is very much a part of the band and we were looking for a violin player to add, someone who could sing and shout whilst playing and maybe play the odd instrument as well as violin, so we've brought Doug into rehearsals for the live show and he's already fitting in well. We recorded with a string quartet on the album because we wanted the strings to be quite a big feature but we've had to re-arrange those parts for live as there's already eight of us playing and some venues just can't cope with bands that size!

I guess there's a core to Alamein's Torch which is myself, David (Evans) piano, keyboards and vocals and Pete (Coggan) guitar and vocals. We wrote together and arranged the tracks. And then there's the rest of the band... Adrian (Gregory) plays guitars, mandolin, banjo and sings; Jules (Burt) is playing extra percussion, some acoustic guitar, glokenspiel and singing and Cat plays cello and sings. Mike Griffiths played drums on the album but having moved away to Bath we now have Lewis on drums who already feels like part of the band. Then most recently Doug has joined us on violin. I played all the bass on the album so I'm now having to learn to play bass and sing but maybe on some tracks I'll play guitar or mandolin.

Tony: Is Alamein's Torch your main musical project now or are you still putting some of your time into leading worship?

Paul: Alamein's Torch is my main focus at the moment. I still write for a number of other projects if I get time to fit that around Alamein's Torch. But I have to be careful to stay focused.

Rich: The 'Alamein's Torch' album isn't a Kingsway release is it?

Paul: No, it is entirely an independent project and it'll be released on Unafraid Records, which is my own label. I didn't want to 'confuse the market' as this is completely separate from Paul Oakley the 'worship leader'. Kingsway's products are a resource for the Church but this is really for those on the outside. My hope is that it will find its own life and its own place out there alongside any other music on the radio and in the shops. We'll be rehearsing a live show and putting some dates together for a tour in June. So if you'd like us to come to a 'town near you' please drop me an email. I think people are going to love the album. It's full of energy and emotion. It's happy, it's sad, it asks all kinds of questions. It has lush musical arrangements with lots of stirring melodies as well as a couple of epic tracks that musically took me to a whole new place. My hope is that it really connects with people at a deep level.

Tony: Name three of your favourite tracks on the album.

Paul: Wow! There are so many great tracks! I think 'Ka'ardi-ak' (which by the way is taken from the dictionary's spelling of how you pronounce the word cardiac! Which means 'matters concerning the heart') is the most fun to play live because literally everyone is singing on that and it's got so much energy... It's actually a worship song without using religious words!

I've got to mention 'Ring Of Bells' just because it's epic... it's almost seven minutes long. It's the last track on the album and it's a poetic description of Brighton, but possibly typical of any city that comes alive or takes on another personality at night, when everybody is out searching for whatever it is they dream about, be that a relationship or a true sense of identity or purpose or just pure escapism. But there's another soundtrack (in the song I used the metaphor of the ringing of distant church bells) that keeps knocking at the door of your spirit that says, 'Hey, you were born for more than this... there's something bigger than you, something eternal, a spiritual reality that never changes'. Some people choose to run from that and some feel strangely drawn to that call.

I guess 'Swallowed' is another song I'd been waiting ages to write. It's like a Psalm 22 with a sense of where is God in the dark places? Or the tough seasons? It turns from a kind of lament where the metaphor suggests you feel like you're being swallowed by all the difficulties and the trials that life throws at you - through a kind of euphoric instrumental section that is like a heart cry or a prayer - and finishes with the line "Fall on me, fold me in wings of love/Swallowed" and just a sense of being wrapped in the arms of grace.

Tony: It sounds like you're enjoying the creative process of writing for Alamein's Torch.

Paul: I love the sense of coming to a blank canvas with no agenda other than to be creative and to write whatever I feel moved to write at the time. It's been one of the most creatively fulfilling and rewarding things I've ever done. I feel creatively stretched and challenged in writing for Alamein's Torch in such a positive way that I'm really growing as a songwriter, starting to learn how to express all kinds of themes and emotions that I felt were maybe 'out of bounds' before and to come up with creative arrangements for a much bigger band than I've ever worked with before. It's amazing! So watch out for the live shows.