New girls on the block RAMIYAH have already made a major impact on the American gospel scene. Dustin Helgeson charts their lightning ascent. 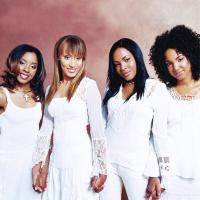 They've opened for Beyonce Knowles, their debut album has been a major American hit and they've got a featured role in the Fighting Temptations movie. Ramiyah have definitely arrived and are already being called the freshest new group in gospel music, a way paved by their contemporaries Mary Mary. This all girl group wants to reach whomever they can, wherever they are.

Detroit-bred singers Sherise Staten, Tracy Bryant, DeLaurian Burton and Stephanie Bonner came together through an audition arranged by PAJAM, who have worked with platinum artists N'Sync, BoysIIMen, Dru Hill and Kelly Price. Out of 100 girls, these soulful four were picked to represent not only the new face of gospel, but of ministry focused music. Sherise comments, "They wanted for all of us to be of one accord. They wanted young women who actually lived what they had a vision for; which was to have a young urban gospel group that would take this world by storm with the message. It was imperative that we live this thing." And so the girls were chosen and were given the name Ramiyah, a Hebrew word meaning "God is exalted".

Ramiyah seem to have already clicked as a group, turning out soul stirring performances at the Showtime at the Apollo and the 2003 Stellar Gospel Music Awards. They have been nominated New Artist Of The Year and Contemporary Group/Duo Of The Year for next year's awards. But you won't find these girls in heels and evening gowns because they love to have a party. Tracy adds, "On stage you'll usually catch us in tennis shoes, cause we love to get down and dance!" With influences such as The Clark Sisters, The Winans, Commissioned, Kirk Franklin, Mary Mary and others, each member brings something different to their sound: an eclectic mix of R&B, rap and gospel.

The production team of PAJAM are an unmistakable force on the debut album: writing, producing and appearing as special guests. Dorinda Clark-Cole and Karen Clark- Sheard, two of Ramiyah's musical heroes, also make appearances. Michelle Williams of Destiny's Child shows up on the album, offering encouragement on a phone call recorded for the album, but unfortunately doesn't sing! With support on all fronts, including church support, Ramiyah have the opportunity to step into the spotlight and be a phenomenal and fresh inspiration for a new generation. Their calling to ministry and to living as examples for young people is a major driving force for the girls, whose youth is still fresh in their minds. "It definitely inspires us every day to keep God first because we know what it feels like to feel that God can't be reached; like we're not worthy of his Spirit, or of his presence. Now that we're living for God and singing for God, we never want the Holy Spirit to leave," comments Stephanie.

Tracy adds that ministry is the focus behind the group: "We want to reach everybody. We want to touch the old church mother on the front row, and that newborn baby that's just listening to music for the first time. As young people ourselves, we've dealt with the same pressures as any other young person has. We know the pressures of being in elementary going into junior high. We've been there. All we can say is: always remember that God is there. You can have fun and be saved. Don't be afraid to stand up for what you believe!"

DeLaurian (aka Glamorous) observes that in an image driven world, "Young people go off visuals and what they see." The group feel they have a responsibility to be shining examples of young people who love God. As examples of modesty, the group refuses to give in to the sexual image that drives mainstream R&B sales. In the way Mary Mary present themselves, fashionable and yet conservative, Ramiyah seem to have adopted a similar stance in how they present themselves visually to an audience. DeLaurian continues, "When people see us, we don't want them to see us, but the glory of God shining through. We're always very careful about showing too much skin, or being too tight. We definitely want people to see the higher calling in our ministry."

Ramiyah is on a mission to add spice to the mixed bag of gospel and take much of that spice from R&B. As young girls, Ramiyah recall how much gospel music inspired and influenced them and want nothing more than to pass that torch to the next generation, musically and spiritually. "It's not common for young people in this day and age to listen to gospel music," says Stephanie. "We want to show them it's cool to stand up for God," adds DeLaurian. Cool it is! This group is in position to make a difference.

I luv Ur Song Waiting !

thank you girls for praising god and sharing your wonderful gift with all of us. i love listing to you, you life up my spirit, when i am slipping away from Jesus you help me get back on track to where i am supposed to be with him. thank you and god bless

"For the Lord watches over the way of therighteous,but the way of the wicked will perish."And this is very well truth in all he time and his hand will make us free and joyful people and in peace and harmony in Christ.Thanks too for your help to the lost,pray for gospel,thanks andbless with hope,keijo sweden

i luv u guys! you are so inspiring to me!