Alexandria Levin: How to make a HIT debut worship album 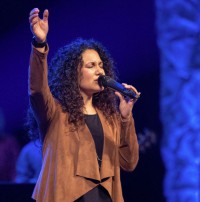 As everyone knows, thousands of modern worship albums are now being released. In such a crowded field, and with so many worship ministries endeavouring to get up there with the Redmans, Zschechs and Tomlins, it's very, very rare for a DEBUT worship album to make the Cross Rhythms playlist. But this is what has happened with a singer and songwriter from Philadelphia called Alexandria Levin. Not only has her "I Can Feel" made it to CR's Verticality worship programme, her songs "Shaken" and "Breathe" have been chosen for the standard Cross Rhythms playlist. I spoke to this hugely talented mother of two about her belated entrance into the world of recording.

Tony: I know you're new to recording but how long have you been leading worship?

Alexandria: "I have been leading worship actively in my church for the past 10 years. I've been a worshipper since I was 12 years old."

Tony: Do you write your own songs?

Alexandria: "I do. I've written on half of the songs on the album, which has been released in two versions, the English one called 'Amazed' and the Spanish one called 'Me Asombras'. I'm currently in the process of writing some new songs."

Tony: How does a worship leader in a local church get signed to a major Christian record label like Dream? There must be thousands who dream of that, let alone then getting to work with a Grammy-winning record producer, Glenn Tabor III.

Alexandria: "I have to give full credit to God. Recording an album had been a dream on my heart for years. The right people fell into my path and made the connections. Had it not been for that, I don't know that this would ever have happened. It was really just the Lord guiding my steps, me following along and saying yes along the way."

Tony: Tell me a bit about your background.

Alexandria: "I was actually born in Germany. My dad was in the military. I grew up in Pennsylvania. I'm a mom of two sweet boys, 13 and five, and I'm a wife of an amazing police officer in Philadelphia. I've been worshipping all my life. That's me in a nutshell."

Tony: When you worship, do you use your own songs exclusively?

Alexandria: "No, I love worshipping with other people's songs if there's a song that I feel has really spoken to me or moved me. I love as well introducing songs that God has put on my heart. I love to worship with all songs."

Tony: 'Amazed' has also been released in a Spanish language version. How come?

Alexandria: "My roots are Puerto Rican, and I grew up listening to Spanish music and listening to my family speaking Spanish. For the longest time I grew up in a Spanish church. The language has always been a part of my life, so when the opportunity came to record in English as well as Spanish I said yes, a hundred percent."

Tony: How did the recording of 'Me Asombras' and 'Amazed' come together?