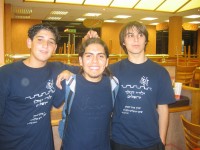 Lenas son is on the right with David in the middle and Nabeel who is Palestinian. Israeli and Palestinian brothers together.

Isaiah 43: 5-6 says, 'fear not, for I am with you; I will bring you offspring from the east, and from the west I will gather you, I will say to the north, give up, and to the south, do not withhold; bring my sons from afar and my daughters from the ends of the earth.'

God is going to bring back his people to Israel and today he is fulfilling Old Testament prophecy. I spoke to one lady, Lena Greshko, originally from the Ukraine and I asked her why she moved to Israel:

"I loved my Grandmother and she was orthodox Jewish. She died when I was 10 years old. Every week she would go into the synagogue, reading the Jewish Bible, but she was the most kind and nice person I ever new.

"I remember one Passover we went to her house and she was crying because she wanted to go to Jerusalem but it just wasn't possible, so I knew about Jerusalem from a very small age.

"When I was a child I lived in a very Jewish area, but for the Jews there it seemed to be a very embarrassing thing to be Jewish. They were ashamed and tried to cover their Jewish background.

"The atmosphere was very anti-Semitic with jokes about Jews, but many Jews were very wealthy, they had good jobs and had a good life, I don't remember having any difficulties in that area. Then I met my husband, he was from an orthodox Ukrainian background. I got baptised in that church because I wanted to marry him. I also became a singer in the church but the roots of anti Semitism ran deep in the church.

"The Christians there really did hate me. It was really open; they tried to do everything to throw me out of the church.

"After 2 -3 years they succeeded and I left the church and said never again will I have anything to do with Christians, they were the worst people in the world.

"Looking back it was really sad to see that the Christians had the answer to life, yet they were ruining their testimony through hatred and anti Semitism, anti Semitism is a very ugly thing.

"Later on in my life there was a time of change in the Ukraine with the crushing of the Soviet Union. Life began to become very difficult, people were hungry without food; without work, so I started to think about Israel more and more, until it came to the point when I made a decision to come.

"I have been here in Israel now for 11 years. I came for free with my children through a special organisation; my husband didn't want to come, so I was alone with 3 kids but I felt I was home in the land of Israel.

"In the past I had said that Christians are the worst people in the world, now I am one, I think God has a very funny sense of humour.

"Many Jews think that when you become a believer in Jesus you are leaving your Jewish identity, but for me I felt that I was becoming a fulfilled Jew. My identity is in Him.

"When I came to Israel with 3 children we had to settle into new life and for the Russian community it would be easy just to be Russian, we have Russian TV, Russian newspapers and a Russian Ghetto. There was a point when I didn't understand my children because they could speak Hebrew and I don't, it was easy for them to integrate into society because of school and the friends they socialised with. Plus they were young and it's easy to learn a fresh language when you are younger.

"For me I had a revolution in my home, I stopped watching the Russian TV and reading Russian newspapers. I started speaking to my children and friends in Hebrew. So now Hebrew is my main language, in fact I taught Hebrew for a while.

"My prayer for this nation is that the nation of Israel would come to know Jesus as their Saviour and the plans for the Jewish nation would be fulfilled because Jesus is coming again here to this land."

i would like to join ukrainian unversity for preparing english bachelor degree, but i do not know exactly which ukrainian that give chance for joining there.would mind helping me? by the way, i am moroccan student , i got english degree(bac+2years) my full name is rachid bikri .i am 29 old years.

Hello Rachid!It is graet to get your pespond to my story.I live now in Israel but i like morocco and tremendous culture of your land.You know a lot of jews come from Morocco to Israel and brought music,food,traditions.I am learning now ethnic morocco music and singing morocco songs in hebrew and arabic.I dont now what about ukrainian university now,but welcome to Israel,we have Hebrew University in Jerusalem,i had been doing my Ph.D in postmodern poetry.
Lets be in touch.God bless.
Lena