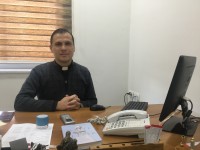 Paul: What are Palestinians on the street saying about Donald Trump's deal?

Munther: Well first of all let's not call it a peace deal because we don't see it as a peace deal. Palestinians on the street completely reject the deal. Nobody had high hopes to begin with because the deal was built without consultation, without listening to the Palestinian perspective so it is heavily one sided and it did not take into account even basic needs and demands of the Palestinian people which is simply applying international law and keeping in line with international law. So the Palestinian community is very suspicious of anything that is coming from the current American administration and the deal was doomed to fail even before it was announced.

Paul: What do you feel about it as a Palestinian Christian and as a Pastor here in Bethlehem?

Munther: Well the deal to begin with ignores the basic human rights of Palestinians it does not look at Palestinians as equal to Israelis. To understand how we feel about it as Christian leaders we have to explain first how we see it and what it is in reality. It is basically putting Palestinians in gated communities, blocks where every discontinuous lands, for example the Bethlehem block, the Hebron block, the Ramallah block all gated with gates that are controlled by Israel and the roads in between them are controlled by Israel as well. To know how Palestinians Christians think of the deal and why we reject it, it is important to understand what the deal actually proposes. If you read closely and if you look at the maps, it is basically what I can call a gated community it is not a Palestinian state but putting Palestinians in blocks that are controlled, we don't have continuity, we don't have borders with the outside world, everything is controlled by Israel. Even leaving one city to the other means we have to go through roads that are controlled by Israel. There are no guarantees in the deal, everything is dependent on whether, "We behave well". So it is very inhumane if you wish in how it treats Palestinians. So in reality the deal is a new Apartheid where you put Palestinians in these big blocks, big communities and control them, control their movement, in and out. That is not a state, that's not giving the people the dignity they deserve and that is certainly now what Palestinians have been fighting for and seeking for the last 70 so years. So it is no surprise that the deal was rejected and if you think of the land portion you know, the West bank and the Gaza strip and let's keep in mind that the West bank includes East Jerusalem which is what we call the 67 Borders which is a mere 22% of historical Palestine. Now we are not even getting that so now the proposal is to confiscate or annex a big portion of the 22 % so what is going to be left for the Palestinians is really very little for the 5 million Palestinians who live under the Palestinian Authority so this is going to further make the lives of Palestinians more difficult I'm afraid.

Paul: You say you are going to get less land; nothing has really happened over the last 70 years so is any deal better than nothing?

Muther: I don't see it this way, and certainly the Palestinians don't see it this way because first of all lets understand that a big part of the so called deal of the century is already being implemented by Israel. Israel controls what is called area C in the West bank which is the areas where they have full authority and military where we cannot build, where they build settlements, in other words whether we accept the deal or don't accept the deal really is not going to stop Israel from imposing their will by force backed by US support in the West bank. Palestinians accepting the deal meaning giving legitimacy to these illegal actions of building settlements and annexing land. So I don't see that accepting this deal actually is better for the Palestinians. Nothing is really promised or guaranteed other than a virtual recognition of a virtual state, 5 years along the line and no Palestinian leader would accept to give legitimacy by the Palestinians to such an action.

Paul: Will it actually create a Palestinian state in the future or just an autonomy where they don't have certain rights and Israel will still control certain things?

Paul: Is Jerusalem important to the Palestinians?

Munther: Jerusalem is very vital to the Palestinian identity, it has a big religious importance and symbolism and giving Jerusalem one identity or making it as one unified Jewish Jerusalem I think will create a big problem and is a denial of the rich history of Jerusalem. The position of the Christian leaders about Jerusalem has always stayed the same, Jerusalem should be shared by two types of people and three religions and the current deal proposal is that Jerusalem will be you know entirely controlled by one side, one people, one religious community and that is not acceptable. So Jerusalem is very important and my fear as a Christian and the fear of many others is that because of it's religious symbolism and one sided actions taken by Israel to change the nature of Jerusalem, that that will further complicate the situation. Hopefully not, but our fear is that it might lead to more violence because you know many religious extremists will take advantage of this and say "Look you see they are changing Jerusalem" and because of its symbolism call for violent acts which is certainly nobody wants to see this. So I think it is a very important issue to deal with Jerusalem in a respectful manor and a very sensitive manor and really respect its history, its diversity and not impose one sided measures on Jerusalem and that by the way will even complicate the situation of the Christian community in Jerusalem as well.

Paul: We have seen Donald Trump recognise Jerusalem as Israel's capital, do Palestinians feel that America isn't a fair broker for peace?

Munther: Of course, we felt this for a long time but America kept saying what Palestinians wanted to hear and to Israel what Israel wanted to hear while allowing Israel to continue with its measures. I think that Trump just confirmed what most Palestinians have always felt which is that America is not fair and that America has an interest in this and they are clear in their support and bias towards Israel. In fact they don't hide their bias in supporting Israel which they see as an ally and a partner and so on and so we have always had suspicion but these suspicions are now confirmed to the degree that it is safe to say no one trusts the Americans anymore and that America lost its credibility among the Palestinians and among most Arabs I would say. I mean we should not be fooled by what we call the 'bro-mance' between some Arab leaders today and the American government and the current American President because on the street most people don't share the same feelings or same opinions that their leaders have towards Mr. Trump. So I would say that surely the American government today has no credibility in the minds of Palestinians for sure and most Arabs.

Munther: The Palestinian Authority is not perfect, but all these need to be dealt in a holistic manor, it's a package deal. What is considered for example incitement in school books, it really talks about the occupation and about Palestinians right to as they are with the books to resist the occupation which is granted by the international law anyways. I am not saying as Christians we want to see armed resistance or anything but all of these needs to be seen in perspective if the Palestinian authority is an occupied or you know under occupation body we are not a real state to be judged by the same standards that you judge a real state by and so there are certainly things that in a perfect scenario needs to be addressed. Things that the Palestinian authority is doing, you know things related to bad administration, things even related to corruption and so on because by and large. No the Palestinian authority is not perfect, but again we need to put things in context, this is not a state with sovereignty this is a government that is fully controlled by Israel and so in the context of occupation we need to address the bigger picture before we are able to judge the Palestinian authority by these standards and the civil society today and many church leaders are working hard within the system of the Palestinian authority to address many of these issues. For example woman's rights is an issue that many civil rights organisations and church related organisations and church leaders have pushed for reformations in some of these laws and the Palestinian authority listened and changed some of its laws, the curriculum currently in schools is being revisited, I know this because I am on one of the committees. There was a discussion lead by many civil organisation movements as well, so it is not as if no one is monitoring the Palestinian authority or no one is trying to make things better and I am happy to see that these efforts are done from the inside from the civil society not under pressure from donors of governments. But again while as I said we are all a part of this reformation process and we shouldn't be silent about it and we should put things in perspective, this is not a state that can be measured, be judged like other states, we are under occupation and that is important to keep in mind.