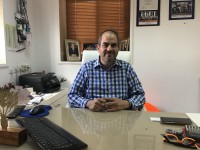 Hatzlahah means success, saving lives, a rescue. In Hebrew, when someone needs help, he says Hatzilu. So Hatzalah is saving and United is uniting people from everywhere in one mission.

Paul: What inspired you to start an organisation like this?

Eli: I grew up in Jerusalem as a kid and when I was 6 years old I was near a bus that blew up, a number 12 bus in 1978. I was only a kid and I saw people dying right in front of my eyes. It pushed me towards it when I grew up I said the only way to cope with this trauma that I saw is by becoming a doctor and so when I was 15 years old I went to volunteer in an ambulance here in Jerusalem. I went to do the course to become an emergence medical technician and I went to volunteer in the back of an ambulance. I realised after a year and a half of volunteering in the back of an ambulance that it is almost impossible to save people because we don't get there fast enough. It would take us 15 -20 minutes to get to an emergency so if someone was not breathing we would get there and the person would be dead already. I realised something had to changed. Then a 7 year old boy choked from eating a hotdog and it took us 21 minutes to get there to this kid. It was in the south part of Jerusalem and when we got there the mother was devastated, she was in a panic attack "Why didn't we get there earlier". She thought it took us 2 hours but it took us 21 minutes and we couldn't save this kid. Unfortunately this kid passed away and at that moment I realised that if we had people surrounding this kid who would respond to the emergency before us we would save lives. So I decided to create a flash mob of life savers volunteers will be trained as EMT's and have medical supplies with them all the time and they will stop everything they do and run to save other people and that is how I started. I was 16 years old, 15 of my friends joined and we bought these motor cycles, we equipped them as ambulances, so we called it an 'ambucycle'. The volunteers were ready to go any time day or night, rescue people, save people, be the servants of people and that is how it grew to where it is today with over 6000 volunteers.

Paul: And the key is being the first on the scene of an incident isn't it?

Eli: The key is to be there before 2 minutes. A 90 second response is our mission. So we have people everywhere who are on call. Imagine to yourself someone is choking now, they call for help, their next door neighbor who is a plumber, that is what he does for a living he gets an alert on his phone that this kid is choking, he stops his job or he leaves his home and he runs out to save this kid as he is an EMT volunteer. He does his work as a plumber, that is how he makes a living, but these people are all volunteers and they are ready to go 24/7 so that is why they get there in 90 seconds.

Paul: So, what percentage of people are saved because you are there so quickly?

Eli: It is an interesting question because worldwide the American Heart Association says that if you get to someone with a cardiac arrest within the first 2 minutes and you shock them with a defibrillator, you have a 90% chance of saving them. Every minute after that is 10% less. The rate of lives saved in the world of people who have cardiac arrest is less than 2%. Here in Israel we have over 28% of success of cardiac arrest because we get there in the first 2 minutes. Now I am not saying we are fine with this result, we want to get to 90 % rate but don't forget sometimes people call too late. So our goal is to get people alerted, that if something happens they don't think twice to call United Hatzalah. We have everyone ready to go and eventually when we have 90 second response everywhere in Israel we will be there and have 90% rate of success.

Paul: So, people will call you before the ambulance?

Paul: So, when an emergency comes in what is the procedure, what happens?

Eli: So an emergency comes in and we send out alerts to the closest 5 volunteers to the emergency. We send it through an app that we created and these volunteers are supervised by dispatchers here to make sure that they are going to the right place. Everything is automated and we have the best technology in the world when it comes to locating EMS people to make sure they get there on time. We train these volunteers every year to make sure they are on the top knowledge of everything. They get a defibrillator, medical supplies and we have people from all around the world who support us in buying these. We go out to about 2000 emergencies every day.

Paul: And you use motorcycles so you can get through traffic faster yeah?

Eli: Yes, because you see ambulances stuck in traffic everywhere, in any country around the world. Motorcycles don't get stuck they can go in between cars they are narrow enough to go and get there fast and they are equipped with everything an ambulance has so they get there fast, they save people. 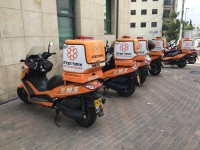 Paul: What sort of emergencies are your responders called out to?