Eli: About 1 hour ago we had a pregnant woman who was on the way to hospital when the baby decided to come out. Her husband called for help because the baby was coming out at the side of the road. Guess what? 90 seconds later we had two United Hatzalah volunteers delivering this baby, a healthy baby. We also had a 62 year old in cardiac arrest and volunteers were there right away and they saved this person's life. We have heart attacks, strokes, car accidents, unfortunately terror attacks happening a lot.

Paul: And these are just people who are volunteering doing their every day job but responding quickly to an incident.

Paul: Do you know how many people you have saved?

Eli: Well we have treated over 5 million people since we started. In a day we save about 140 - 150 people a day, that are saved because we treat a lot of people that are OK, by the time we get there they feel better but 150 people a day that we know that are between life and death that we saved.

Eli: Many times we would find elderly people, holocaust survivors or people who don't have families a week or two after they had died in their homes which was a disaster to see every single time. We realised that no one really paid attention to these people or cares about them. They don't want to go to their doctors because they are just sick and tired of waiting in a waiting room for so long, so they don't go. So we started adopting elderly people and we go once a week to do a full check up on them. We have 700 elderly people who are like that who are lonely that we treat. We have a program that is a cycle trauma unit program, the same way we go and help people that are having a medical problem we also go to people who have emotional problems. They may have just seen a bad disaster, a bad accident, a fire or a terror attack and they saw people die. They need emotional help. We have professional people who are trained for that, they get there within the first 15 minutes and save them from going onto post-traumatic stress. So these programs are developed because of what we did and saw the need of these things.

Paul: Your life was in danger just recently with Covid 19, tell us what happened?

Eli: I was in Miami, travelling and raising money for United Hatzalah and I had a few events that I was supposed to go to there and I felt a little tickling in my throat and then I had a fever and I said, "Oh Boy!" No one was sick in Miami, everyone was healthy but I was just coming back from London and I said "Maybe on the plane, I don't know, I'm going to go and isolate myself and be in quarantine." Three days later I couldn't breathe anymore. I went to hospital in Miami and I was admitted right away to the ICU. Three days later they told me they have to induce me into a coma and intubate me. My situation was critical. I was literally in a situation of life and death and I was there for almost a month in a coma fighting for my life. I had millions of people that were praying from all over the world and if it wasn't for the prayers I wouldn't have been alive.

Paul: Yes, I was going to ask you were special prayers actually said for you?

Eli: Incredible prayers were said. A 12 year old child with very bad cancer was praying for me 3 times a day and saying special prayers for me and he said to me on the phone, "You should just know I was praying for you, I want you to recover" and I was saying "you need prayers" he said "no, no, no, I prayed for you because when I grow up I want to be a volunteer of United Hatzalah so I want you to be healthy". I was crying when I heard it. I had so many people praying in every religion, people from all over the world that cared about my life. I still have a long mission in front of me and I want to save more and more people. So when I got sick people realised this organisation is crucial and I had people putting in time and effort and doing good deeds. Before I was incubated I sent out a video. I could hardly speak, and I asked people to please pray for me and do good deeds and support the organisation and people listened and people were all over just praying and I felt that energy. I was in a different world but I was pulled back to this world, I was literally pulled back by the prayers of people to God to just save me.

Paul: Do you have effects from the virus today and do you have a new lease of life now because you have actually come through this? 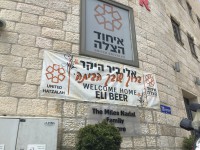 Eli: So, I was reborn again as I have energy. It took me time to get back to myself with a lot of physiotherapy. Someone asked me yesterday, "Eli are you back to normal?" I said, "No, I'm working only 12 hours a day now". So I used to work 18 hours a day but I take 4 hours now to relax a little and I have more time for my children, my family and I am back full force but I need a little more strength to get back what I used to be so I have a long way in front of me.

Paul: You were in the United States, what was it like coming back to Jerusalem?