Alisa Turner: The Nashville-based singer ministering Miracle Or Not 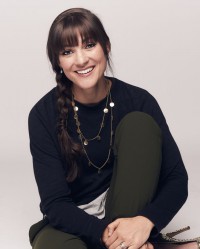 The debut full-length album 'Miracle Or Not' has been called "modern laments and psalms filled with hope" and seldom has a project been released which relates so specifically to an artist's journey through pain and problems. As a teenager, Alisa contracted Lyme disease and even now she struggles daily with pain and the debilitating effects of her affliction. Also, newly married, she lost her baby boy. Now with her album, produced by Dove Award-winner Michael Farren and including co-writes with Tony Wood, Benji Cowart and All Sons & Daughters' Leslie Jordan, 'Miracle Or Not' explores the depth of what it means to worship in the dark and to fight one's way back to the light, day after day.

Alisa was born and raised in North Carolina. She told The Waking E-Zine, "I took piano lessons as a little girl but with my father being a pastor and us always on the move, it was hard to keep up with lessons and finding teachers. Eventually I just started fooling around on the piano by myself and discovered being creative and making stuff up and I've never stopped. I never took voice lessons, just kind of sang all my life everywhere I went. . . Songwriting and singing is like that favourite sweatshirt everyone's got, it just fits!"

In 2008 Alisa recorded and released two independent mini-albums, '1007w 24th' and 'Alisa Turner', and a year later a full-length project, 'It's Not Over'. She toured with Jeremy Rosado, one of the finalists of American Idol, and worship leader Robbie Seay. But then her career in Nashville was devastated when she received a phone call that her worship pastor father had died after a massive heart attack. Shaken by the loss, Alisa returned to North Carolina but there her health declined until she was hospitalised and dependent on a feeding tube. The singer would remain bed-ridden for six years.

Finally, she was able to resume her music and in 2016 released an EP, 'Hot Cocoa In My Cup'. Shortly after that, she was signed to Integrity Music. Her debut EP for the company, also called 'Alisa Turner', featured the song "My Prayer For You" which received considerable US airplay. Alisa spoke to New Release Today website about "My Prayer For You": "This is the only song on the EP that I wasn't a writer on. Michael Farren and Jessica Campbell wrote it, and they knew my story in writing the song. Michael sent me the demo, and I was sitting at the airport listening to the song and I was weeping as I heard it. They intended to pitch it to another artist. I was completely wrecked by the song in the most beautiful way. I thought people were going to think my dog just died as I was sobbing as I was boarding this plane. It resonated so deeply with my life and the story that the Lord has been writing and the struggles that I've walked through. I begged them to let me carry this song, and I was very thankful that they said yes. It's really been a song that helps tell my story.

"The very first line says 'For anyone who's prayed a thousand prayers and still can't find the answer anywhere,' and I'm in line with that. I've prayed a thousand prayers and then some in a 10 year period of my life with extreme amounts of loss and fighting with illness. Particularly with illness, my Lyme disease has taken a lot of time and treatment, and it's been a constant prayer of mine to God to please, please, please heal me and set me free of this. I don't know if I ever truly will be free of it in my days on earth, but I do know that he's never let me walk through a day of it on my own, and he's such a provider and protector through all of that. This song talks all about that."

Now her 'Miracle Or Not' album seems set to take Alisa's ministry to the next level. One of the singer/songwriter's favourites on the album is "Loved". She told Melissa Riddle-Chalos, "If I can just let people know they are still loved, they have value and they still have reason to fight, that is what I have to do with every song, every word, every hug. And I'm a hugger," she added. "I hug you 'til it gets uncomfortable and you just have to give in, settle and breathe." Another standout on the album is the bluegrass-tinged hymn "Only My Jesus", which was co-written with Leslie Jordan who sings on the track. Said Alisa, "There will be days that you show up and days you don't. But he will always be waiting for you. The deepest peace, steadiest hope and truest joy will ever always come from 'Only My Jesus'."

The most powerful song of all on 'Miracle Or Not' is the title track. It was written at an Integrity Music songwriters' retreat as she sat fevered and weeping nearby. Her fellow songwriters, Michael Farren, Mark Alan and Britain's Lou Fellingham, prayed for Alisa and wrote the song for their friend. Its lyrics are powerful. "I will sing till my broken heart believes it/'Til hope is finally louder than the ache/I know that you love me, miracle or not."

Alisa told Melissa Riddle-Chalos, "Songwriting is so connective. I know they wrote it for me, to help send me a message at such a horrifically low point in this past six months, and so it was a gift. . . a reminder that just because he doesn't heal me, it doesn't mean he doesn't love me. Whether God heals me or not, he will not abandon me on this journey. He will not abandon you on your journey. He is always for you, miracle or not."