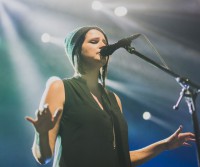 Go into iTunes and you'll find three different artists called Amanda Cook. But with the greatest respect to the classical guitarist and the country singer bearing that name for the Christian community there's only one Amanda Cook. The first album Amanda has recorded under her own name for Bethel Music, 'Brave New World', this week debuted at number one on both the UK and American Christian music charts. The pivotal point in Amanda's rise to become such a hugely influential singer and songwriter was of course the release in 2014 of Bethel Music's 'You Make Me Brave: Live At The Civic'. That album, recorded at Bethel's women's conference, featured stirring worship from such worship leaders as Kristene DiMarco, Jenn Johnson and Amanda Cook but it was Amanda's captivating call to overcome fear "You Make Me Brave" which catapulted the album into the charts where it still remains 75 weeks later.

Amanda spoke about the "You Make Me Brave" worship classic. "One of the greatest gifts about writing is that we get to write to give ourselves courage in the things that we aren't courageous in. If we look at our lives as a story and songs as stories, we get to write ourselves into the person that we are becoming through grace. This song is about my journey and my process. I don't feel like after writing the song that I am finished and that I am done and now I am brave. It's a song about a process that is ongoing. The song was inspired by moments of seeing all of my fears in the light of the fear of the Lord. It was seeing God, and then seeing my fears, concerns and anxiety as being so small comparatively, because he is so magnificent, and he's so got me. One of my favourite lines in the song is how he is for us, not against us. The fact that God is God and he is big but he is for me and has never been against me is incredible. The song is about singing those statements of who God is and who I am in him and then putting fears and temporary things in their proper place and perspective."

Like so many artists before her who appear to have made an "overnight" rise to success, Amanda has in fact worked for many years in Christian music ministry finding accolades only in her country of birth, Canada. Born Amanda Falk in 1984, she grew up in a farming family just outside the city of Winnipeg. In 2010 Amanda told Cross Rhythms, "Both of my parents are very musical - my dad plays guitar and sings. . .I remember listening to him practise as I would fall asleep. . .and we attended a church that actively involves music in worship so I was always empowered to use and grow my gifts to glorify God with them."

In 2004 she released the album 'Amanda Falk' on Winnipeg label Avante Records. It gained considerable popularity in Canada and eventually won a Juno Award as Contemporary Christian/Gospel Album Of The Year. In fact the Canadian offshoot of the Gospel Music Association (GMA) named Amanda Female Vocalist Of The Year for four years from 2005 to 2008. Falk's second album 'Beautiful' was released in 2007 on Avante Records and even produced a couple of Cross Rhythms turntable hits, "Beautiful" and "This Is Love". In 2010 she released 'In Between The Now & Then' on the label formed by the Canadian singer/songwriter Steve Bell, Signpost Music. Later that year Amanda relocated with her husband to Medicine Hat, Alberta where they served as leaders with the renowned Global House Of Prayer. But it was her crossing paths with the Bethel School Of Worship which led to a closer and closer relationship with the internationally influential revivalist ministry. 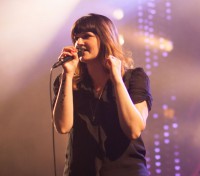 Amanda soon became a key contributor to Bethel Music albums like 'Be Lifted High' and 'For The Sake Of The World'. Amanda is keen to acknowledge the influence Bethel's Brian and Jenn Johnson have been on her. She said, "I was handed one of their records when I was 21 and it introduced me to the face of God in a way that I had never experienced."

On the WorshipU blog Amanda was asked what was the process she undertook in getting from where she started leading worship to the place of freedom in worship she now enjoys. "I have battled with a lot of anxiety and fear for most of my life. Even if I had a song, it was hard for me to sing it out. It was hard enough just being on stage, much less leading anything. I started out at 11 years old with my parents who were worship leaders and they were so sensitive to my process. They wanted me to overcome my fears but they didn't just throw me out there; they helped me along in steps. I would play piano with the worship team while my dad led worship and the piano wouldn't even be on stage, they let me gradually adjust. I knew from a young age that I always wanted to be part of the worship sound, whatever that looked like. My first piano teacher was a worship leader and I would go and watch her lead for citywide worship events and would see what was on her life and would feel so much when watching her lead and knew that whatever that was, I had to be a part of it. I didn't know what that looked like; I just knew I had to be a part. So as I grew up, my parents gave me bite-size pieces to step into, a song here, a song there, and I would find myself in those moments and learn how to fully express myself to the Lord."

She continued, "I didn't start learning about prophetic worship until later on. Learning how to express my heart to him and learning the language for the prophetic didn't come until I was around 21. It was right around the time I got Brian and Jenn's CD and an IHOP conference happened in my hometown. They would sing Scripture and just sing out what was in their hearts and I was in awe, watching them leave the arrangement or structure and sing out spontaneously or prophetically. It totally spoke to my heart and it provoked me to want to sing those things, to sing out my heart to him and to sing what he was saying to me. At that time I was part of a young adults' ministry that met in a basement on Monday nights. The pastor of that ministry was amazing and he knew that there was something in me that wanted to get out and so at the end of the meetings when the band would go up to play, he would give me full permission to go up and sing if there was something on my heart to sing or if I had a word of encouragement from the Lord. It was so beautiful because at the end of those meetings, people would either be leaving or laid out on the floor so it gave me a place to try things out and risk while still being somewhat hidden.

"It takes so much courage to step out and take a risk to sing out prophetically and requires us putting our whole hearts into it. If we haven't developed trust and relationship with our leadership, we are going to feel very vulnerable and sensitive to any feedback that our leadership gives about those moments. If leaders are going to trust me and release me to lead their group of people, hopefully there is relationship built way before that."

The album 'Brave New World' was produced by two of Nashville CCM's safest hands, Jason Ingram and Paul Mabury. It has already received numerous accolades. Soul-Audio.com wrote, "On 'Brave New World' Amanda Cook opens the door to a bright pathway of exploration, inviting listeners to taste, see and trust that God is in fact good" while NewReleaseToday wrote, "Amanda Cook has created a beautiful atmosphere of genuine worship and praise."