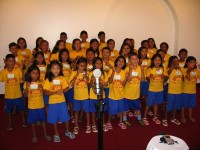 Tony Cummings reports on a unique children's worship album by the AMAZON RIVER KIDS which is raising money to help the neglected families living along the Amazon River.

Maybe the front sleeve flash 'Featuring Margaret Becker' on the 'Amazon River Kids' CD distributed in Britain by Kingsway Music will encourage some fans of the CCM singer/songwriter to investigate the album. But in fact 'Amazon River Kids' is much more than another CD released into a marketplace saturated with children's music albums. It is an active expression of the Church moving out from its comfort zones to bring help and hope to the poor and undervalued, in this case the children and families living in the villages scattered along the edge of the River Amazon in Brazil.

There are approximately 80,000 untouched villages in the Amazon Basin, the majority of which are deep within the jungle. 99 per cent of these villages have no schooling for their children. Currently parents have little choice. Either they face a long and arduous journey to the nearest school or there is no education for their children. Many, if not all, villages feel abandoned and uncared for by their government and the world alike. For instance, the people of Balbina Island were placing their six to 12 year olds in small canoes at 3.00am simply to reach the nearest school, three hours to school and three hours back. Many of the exhausted children would fall from their canoes into the night waters; several were lost in that way.

Now the charity Ray Of Hope has been set up to meet the needs of the people of the Amazon, bring love to villages in very practical ways, by holding kids clubs, delivering food bags, working with children with special needs, helping young mothers tend to the needs of their children and now, strategically building schools in remote locations for their people and supporting pastors. All proceeds from sales of the 'Amazon River Kids' are going to the Ray Of Hope charity.

Lucy Mhondera, who works in media liaison at Kingsway Music's Survivor Records and who is the daughter of Kingsway's managing director John Paculabo, explained how Britain's leading worship music company got involved in the Ray Of Hope charity. "My family got involved four years ago when dad went to Brazil on business and he met a lady who was the translator. She was a Christian lady and felt the Lord tell her to show John the Indians who were in the Amazon. So she took him down there. He returned the following year with the rest of my family and really felt God say, 'I want you to invest into these people.' He'd had a prophecy the year before about bringing worship to the poor and he, working for a record label, thought that meant bringing CDs to poor people, giving them resources. But then he realised that God was actually saying that he needed to sow into the lives of people and 'love your neighbour' might not mean the person on the next street over but might be people thousands of miles away.

"He started off by wanting to invest in a teacher for the people of the Amazon. There was a school there but it had no teacher and the kids weren't going to school. He felt God saying to try and raise money for a teacher. It pretty much started like that. We now have 10 schools so God actually had a lot more planned than what we expected! The ministry is called Ray Of Hope and has been going for four and a half years. We've got a lady called Gloria Santos who heads it up in Manaus, the capitol city of the Amazon. But we work very much on the river in the jungle with very primitive native people. It's been amazing!"

Lucy explained how the 'Amazon River Kids' album came about. "Basically, with us all working very closely to Kingsway, the whole vision sort of filtered down to a whole lot of people working there. Stephen Docherty who runs Kingsway Music really caught what was going on and went down there and God just broke his heart for the people there as he hadn't really been involved in much of that kind of stuff before. He went down with a guy called Chris Donohue who is a producer and musician in the US. They both had this vision to try and produce an album with the kids as a kids' choir that would help raise profile for the charity with all the proceeds from the album going straight back to the villages and the work of Ray Of Hope. So it was very much birthed from that. Even though it's not a Kingsway charity, Kingsway Trust is one of their supporters and is very much involved and wants to get even more involved."

Jorge Mhondera, husband of Lucy and a hugely experienced South African-born musician who has previously had stints with MIC and The Tribe and who now does A&R work for Survivor Records, spoke about Margaret Becker's involvement in the 'Amazon River Kids' project: "She met Chris and heard about the Amazon and the project and really wanted to get involved, to just come and serve and give of her time. Margaret came out and spent some days there and went on the river and met all the kids and actually learnt some of the songs in Portuguese. It was an amazing time. The kids absolutely love Margaret - she's a great artist and has a big heart so it was great to have her."

Jorge, who was one of the Amazon River Kids choir conductors, ruefully admitted that recording a professional sounding album was subject to some very real logistical challenges. "It was kind of interesting to look for a studio out there! Things are always laid back in developing countries and so they don't see the need. . . if the mic's half broken, that's okay! But we did find a bunch of amazing guys who helped us out to get a decent studio in Manaus. They had to go into the jungle and get all the kids - I think they were from four different villages so we went out on a boat down the river and collected the kids! That took a whole day and then we brought them back to the city and put them up and then the following day started to record."

The songs on 'Amazon River Kids' are an intriguing selection - Tim Hughes' "Here I Am To Worship" rubs shoulders with the Parchment evergreen "Light Up The Fire", Ishmael's "Father God I Wonder" next to Keith & Krystin Getty's "How Good It Is" that in Portuguese becomes "Coma A Bom" and in the Nhagatu-Indian language "Coma E Bom". Reads the sleevenote to 'Amazon River Kids', "This song ("How good It Is") was the uncontested hit of the jungle. It was heard everywhere on the river and off, and the kids' rendition of the track brilliantly exemplifies the spirit of the lyric. We fondly remember our English friend Darren Alistone being taught to correctly pronounce the chorus by first one, then three, then five of our young friends. He never quite got it, but his effort and good humour were tremendously entertaining."

Jorge commented, "The guys sort of came together and just thought about what kind of songs would easy for the kids to learn - there's quite a mix in there. What was amazing was that none of these kids had actually left the jungle before or been to the city. For them it was like this massive adventure. Children in the jungle have so much responsibility they have to grow up by the age of 11. What they have to do is insane. But in Manaus they actually just got to be kids. They could play around. They could eat pizza. And the highlight for them was being on the escalator in the shopping malls! The most amazing thing about 'Amazon River Kids' was building dreams. It helped them realise that the world is so much bigger rather than just being on the river. There, their lives are just fishing or growing crops and that's it. They grow up and they never leave. I think that just taking these kids out to the city and having them record something gave them a huge sense of achievement. It also encouraged them to think 'the world is so much bigger. I can get out there if I try, if I push with this education.' That's what we want to do - to help these kids dream big dreams. That's what we want to sow into their lives."

ray of hope is awesome! what they are doing is amazing. the cd is so sweet!