Liam Valor was born at noon on April 7th, 2014. Kat was a champion and my hero. Liam, he was perfect. The first time I saw him, our eyes met and I saw heaven right there in front me in this beautiful baby boy. To try and describe it in detail would only fall short and cheapen the moment. What I can say is that it was truly a spiritual experience.

We spent four days in the maternity ward of Boca Regional. Those days were surreal. Emotional. After the week we just had, being surrounded with the sights and sounds of new life was the best medicine. While in the hospital, "Band Of Sons," the first single off my record, was released. The main line from the chorus, "Time will tell what you're really made of/The dust of earth and revival fire," was a prophetic cry to my own heart. While holding our newborn, we had the evidence right there in our hands of God's faithfulness. Now it was time to go home as a family and begin our new life together.

But the storm hadn't completely passed.

An hour after we came home from the hospital I had to abruptly return to the ER under the suspicion that I could possibly have a blood clot. Lying around for two weeks in a hospital can do that to a person I guess. And my doctor was right. So now I'm back in the place I began. This time sequestered in room 925. "How great are your doings, O Lord! Your thoughts are very deep." Ps 92:5 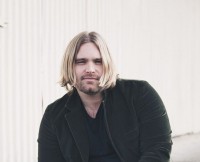 I welcomed change passionately. My circumstances were beyond my control. All I could do as I sat in my hospital bed, alone again, was worship. None of this made any sense. My wife and newborn son are at home and I'm here in the same hospital on the same floor hooked up to another IV. All I could do was worship. I grabbed my guitar and looked out the window, this time I'm facing north and I began releasing a song of praise. . . "Death has passed over my house forever/We have been covered by the blood of the Lamb/Death has passed over my house forever/My cup runneth over with the Spirit of God/As for me and my house we will serve You Lord forever."

Over the next few days I encountered the love of God in that hospital room like never before. I've never really used the word "portal" to describe an experience with God until this moment. It was as if something opened up over me and the waterfall of God's presence was washing over me right there in my weakened state. My spirit man was so alive in God. Song after song kept coming to me. All I had to do was catch them. In the span of 48 hours I wrote 14 songs. Death may have been knocking on our door, but the Spirit of the Living God was answering. All I could do was worship. I thanked God for every moment and for every breath. Being faced with our own mortality brings the days of our lives so clearly into focus. We see them for what they really are, gifts from God.

Meanwhile, as I'm meeting with God tucked away in the "cleft of the rock" of my hospital room, Jesus Culture is releasing my two latest singles "All On Fire" and "Meet You There". And I wasn't angry with God. I was mad as hell at the devil. But I wasn't angry with God. I just kept remembering what Kat had told me from the beginning, "The only thing the devil is permitted to do is set a stage for God to reveal his glory." To know that people were enjoying the fruit of my relationship with God and yet unaware of my current condition seemed appropriate. It wasn't news. It was process. The songs may have been written. The record may have been released, but the testimony was still being written and God was about to reveal his glory here at the very end.

I received a phone call from a dear friend of our family. He called to tell me about a dream he had the night before. It was an elaborate dream. He was driving somewhere in his car but had to stop because a house was right there in the middle of the street. He couldn't drive around it so he had to get out of the car, and when he did an old man invited him into the house. While following this old man through the house, a telephone rings. The old man answers and says, "It's Andrew calling for you, Donnie." Donnie picks up the phone and says, "You're calling to tell me you've been healed, right?" I was on the other end with tears of joy telling him that God had indeed healed me.

While listening to Donnie's dream on my voicemail, my neurologist entered the room and said, "We've scheduled the biopsy for Tuesday morning at 9 am." The "biopsy" meaning a brain biopsy where they were going to shave my entire head and cut out one of the lesions. After three weeks of treatment, they still were stumped. I felt Holy Spirit say to me, "You're not going to have that biopsy." And in that moment I had to make a choice. I had to choose who I was going to believe more.

The day before the scheduled biopsy was April 14th, which was actually Passover. Months before Kat and I decided we wanted to have Liam circumcised on the eighth day. Not for religious reasons but because we'd learned that Vitamin K was released in a baby's body on the eighth day and acts a natural coagulant, which makes the circumcision less painful. Leave it to science to prove that God knows what he's doing, right? So my wife and son, some close friends, and the medical staff all gathered back down on the third floor in the maternity ward for this special moment. At this point, I hadn't seen my son since we left the hospital. Me in my gown, with guitar in hand, sang my song of praise over him. "As for me and my house we will serve you Lord forever." This was another holy moment for us.

And it was after this that my doctor came back into the room to deliver his latest word. The brain biopsy had officially been called off. The reason being that the last MRI showed such a dramatic decrease in the size of the lesions that they couldn't even do a biopsy any more. Not only that, but all the swelling was gone. As soon as he left the room, I immediately heard Holy Spirit whisper to me, "I told you so." Lying in bed I just burst into laughter and began to thank God for his great doings. I was released from the hospital a couple of days later and asked to come back in a few weeks for a follow up visit. A few weeks later I was even better than before. Death had passed over for good this time.

So much more happened during the month of April I don't have the time or space to put into this article. Can you count the drops of a waterfall? I guess if you could, it wouldn't be a waterfall. No, you just stand beneath its flow and experience the majesty. God once told a man named Abram to count the stars if he could or even count the grains of sand on the beach. God promised that man long ago his descendants would be just as numerous. God encountered that man and as a result his circumstances changed drastically. Even more so, the man Abram was changed and Abraham was born. I can relate to this. As my son Liam was being born, I too felt a rebirth happening in my own spirit. God was taking something away from me, but he was giving me something so much greater in return. His promise fulfilled.

Change comes us to all. Sometimes we ask for it. Sometimes we're ready for it. Other times it comes upon us like a thief in the night. No matter what though, I am more confident than ever that what God is really after is not changing our circumstances, but transforming our hearts. And He is relentlessly pursuing for the sake of knowing his heart. He is good. He is kind. He promised us heaven and earth if we would only trust and obey him like a little child. Free from the bondage of having to explain everything in order to feel in control. That's the essence of belief. That's what Abraham learned. That's what he became. In the end, knowing God is what truly changes us.

Glad that you are well. Think of you often
Why do you think god did not heal John
Plenty of people were praying

What a testimony,Wow!!!!! Just listened to Beauty Is What Remains,so impressed I had to find out more about you.May God continue to protect and bless you and and your family.

I have not heard any of your albums you have released Andrew but I thought of you tonight and wanted to see how you have progressed over the years. Blessing be to your miraculous healing, there is no greater healer than above. I am going to check out your music and see how it translates from you life experiences and see way I get out of it. I am not surprised by your recovery, miracles are unusual for those who have faith. Glad your doing well :) Congrats on your child!

Still stands as one of the most incredible and encouraging testimonies I've heard. He didn't even mention the chief surgeon who he ended up befriending during the experience and had a major impact on. That's a whole other cool part of the story. I seriously appreciate Andrew's music so much more knowing his prophetic journey.
The first time I heard his story was just last year when a friend of mine had an almost identical diagnosis. He was just 31 when he discovered he also had a life threatening illness and the amazing thing is that God also gave him psalm 91 as his chief scripture!! I made him listen to a testimony of Andrew I found online to encourage him. One year on (and several surgeries later) my friend has been given the all clear and is moving back to join our ministry school this month! Amazing God!

Thank you Andrew for your amazing testimony. God lead me to it after wanting to know who this singer was that sings Cornerstone. Can't get this song out of my head and don't want to. May God continue to bless you and your family. Keep writing and singing your praises to God. You bless me.

What a testimony!!our God is greater!!faithful!!he has done what man has not done or can do!i bless God for you.am blessed,encouraged by your testimony.God bless you and keep you.