British-born singer/songwriter ANDY MAYO sat in the hot seat of the famed quizmaster. 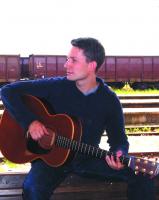 2. Where did you pick up your jazz influence?

Soho jazz festivals to gypsy friends in the Balkans.

3. You have now lived in the former Yugoslavia for seven years. Is there such a thing as Yugoslavian Christian music?

Yes, in fact 'Dreams Of A Homecoming' is arranged and mixed by a brilliant Christian artist -Stanislav Majerski... There are very creative people who love Jesus and who are using their music to communicate powerfully inside of their culture. In the mission centre that Faye and I are leading in the north of Serbia, a number of us have worked together to set up a recording studio as a facility for recording more of this music.

4. Do you prefer hotdogs or hamburgers?

A favourite breakfast with my little boy Elliot is a shared hotdog on our front step in the early morning sunshine. It's the company that makes a meal for me.

5. What Scripture verse has most inspired you?

For 'Dreams Of A Homecoming', this has to be the verse in Luke 15: "While he was still a long way off, his father saw him and... ran to his son..." This is a moment of homecoming, of love shown without condition... A picture of a restored relationship with "a father whose arms have long been held open..." An image of the love that our heavenly Father waits to lavish on the one who will turn to him. I have experienced that homecoming -something for which many only dream of from a distance -but my prayer is that many will come to that place of restored relationship and forgiveness in the embrace of the extravagantly loving Father.

6. Are you related to Simon Mayo?

I believe so -I think more importantly, it is rumoured that our mutual great-grandfather invented a famous salad dressing.

7. What's your favourite song on 'Dreams Of A Homecoming' and why?

Each song has come out of a specific situation -a snapshot of a moment. I wrote "Coming Home" after a girl who had been devastated by the wars around us, in tears and with arms raised to the Father who loves her, prayed to experience the cleaning, forgiveness and new life that he waits to give. This song is where the album is going. My prayer is that others will experience the ultimate of homecomings as they listen to the message of the CD.

8. Your lyrics are rather poetic. What writers have influenced you?

From Jeremiah to Jack Kerouac.

9. Have you ever played a Christian festival?

Yes, including Cross Rhythms after the release of my first album, 'Cafes And Trains', GrassRootz, etc.

Exciting, eclectic, eccentric! Fantastic musicians including Buster Birch (percussion) and Pete Ringrose on bass are joining me for the next recording. Just today, five of us have been experimenting, developing, arranging new material -bouncing musical ideas around -we are beginning recording next week but the material will not be available for release for a few months yet as we hone the sound together... We'll keep you posted!

Fantastic interview, I have met Andy several times in Serbia and just thank God for him and his family, they are so respected in the balkans for all they have done and have made so many amazing friends along the way as have I.

I just want to say that God did a great things here in Serbia trough Andy and Faye,and for me it was amazing expiriance to be a student in bible school.God was realy change my life there and His Word is become more precious to me.Andy,we love you and cant wait to see you again!!!

Wow-I loved this interview! God has blessed me so much through the Mayo family & the Dreams of a Homecoming album is special to me in so many ways!I especially love "Princess in the Park" & "Today". I'm once again looking forward to being part of the next Serbian adventure as we travel through Bosnia onto the Bible School in Serbia;>. (Andy-I will remind you of your comments about meals all being about the company when I burn the hotdogs for our luxurious cooked breakfast-al fresco!). Godbless ya-Jills>.

Jill Lord love Ya, I couldn't agree more both Andy and his Brother Paul are fantastic, Great guys and so are you. The Inspiration for that well known RAP "Pasta Rice and Beans" hope your college plans went well.
Big Phil