A fine new acoustic singer/songwriter from South Africa is ANGELA DIPRIMA. On her recent visit to the UK Angela spoke to Andrew Long. 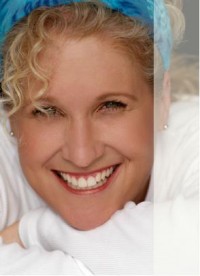 Angela DiPrima is a talented and somewhat cosmopolitan songstress currently living in Capetown, South Africa. A recent extended tour of Europe and the UK combined with a stunning debut album have brought her to the attention of Cross Rhythms. I caught up with her a few days before she returned home and she told me the story of how she came from the US to Capetown.

Angela's family originally lived in Rochester, which is in upstate New York, but when she was about 15 they moved out west to New Mexico. Angela grew up in the Catholic church but in the summer of 1983 she spent a lot of time with some Christians at Calvary Chapel in Albuquerque and began to realise that they had something that she really wanted. At the end of that summer she became a Christian. It wasn't until after her conversion that Angela began writing songs.

"I bought a second hand guitar for about 65 bucks," Angela reminisced. "There was a songbook full of songs that we were singing in church and in the back was a chord chart. I can't read music so I found a song in the book that I knew how the melody went and I looked up in the back to figure out how the chords went and taught myself. I started writing just because it was a way to express everything that was going on in my heart."

Although Angela's church was sending a lot of people on short-term mission work, she was initially reluctant. White face paints and street corner pantomime had no appeal for her. But when presented with the opportunity to use her music in mission Angela decided to give it a try. "I did some training with YWAM in Amsterdam in 1989 and then moved out there in 1990," explained Angela. "I was given a lot of opportunities to take music cross-culturally, singing on the streets, singing in large festivals, churches, public halls."

After four years based in Amsterdam, visiting various parts of the world and having made three visits to Africa, Angela finally decided to re-locate to South Africa. One of the songs on her album is called "Beneath South African Skies" and it had a part in her decision to move, as she explained to me. "My question at the time was, 'Lord, am I supposed to just carry on visiting and giving regular input and learning from South Africa or do you really want me to live there and embrace it 100%?' When I went back to Amsterdam I was really praying about what I should do and what my commitment to the nation should be and that song came out of that. I'd fallen in love with the country and I thought it would be crazy just to go and visit. I really felt like that's where home should be."

Although Angela was previously featured on a compilation album, 'Musicianaries Around The World', 'Pineapples And Penguins' is her first full-length album. When asked who her musical influences would be, she comes up with storytellers like James Taylor and Cat Stevens as well as loving the deep voice of Karen Carpenter and from CCM Michael Card and Susan Ashton. So it's no surprise to hear the gentle acoustic nature of Angela's music, but perhaps the recording techniques used are more surprising. The album was recorded 'live' in buildings with fine natural acoustics using just two high quality microphones, a technique more common to classical recordings. So why shun technological wizardry in favour of this setting?

Angela went on to explain how the opportunity to record came about. "I was singing in a church and the sound man had cranked me through his system with lots of effect and I said, 'Please take me out of that tunnel.' Paul Chaplin heard me say that and wrote me a letter saying, 'If you're interested in recording anything with pure acoustics we need to talk.' So we wound up having dinner and scheming and planning for this CD. He told me his vision and how he wanted to do it. Paul takes all his equipment into a live venue, and we had to battle with pigeons and buses with squeaky brakes and Heathrow redirecting its air traffic because of the wind and it was a lot of hassle and a lot of work but I think that the sound that you get, especially if you're listening to it on headphones or on a really nice stereo system, is real and that's what we were shooting for."

The finished album is mostly just Angela and her guitar with percussion from Andy Smith and occasional piano from Maria Markesini. Some songs speak of Angela's experiences in South Africa, some are worshipful ballads with Psalm-like lyrics. I asked her for her favourites. "The Voice On The Line' is a song I still find hard to sing. I get long distance phone calls all the time and it expresses a lot of the way I live my life. Also 'Wartime Student Of The News' as far as really saying something, which is what I want to do with my music. Especially with everything that's happening in the world. There are so many nations at war and we've just become so numb to it. I like that song because it doesn't resolve itself. A lot of Christians say to me, 'Are you just gonna leave it like that? Aren't you gonna write another verse?' But no, sometimes things remain unresolved and I'm not gonna give happy endings to everything I write. That's not real life."

A friend recently let me listen to a cd by Angela DiPrima, Jehovah Shalom, I have been searching for two days trying to locate that cd. Dated 2004, Calvary Chapel ABQ, NM. Is there any way this is you, and how do we order or obtain this cd. It is copyrighted so I am supposing illegal to copy. I love several songs on this cd. HELP