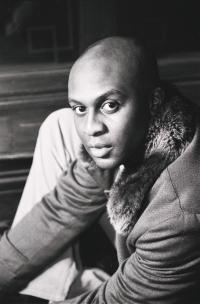 Tony: Make with the biog.

Sam: I am truly a Mancunian born and bred. Born in 1976, I grew up in a West Indian community, the inner city areas of Moss Side and Rusholme, went to school there, and everything. Yet at the heart of my childhood experience was my church - Bethel United Church of Jesus Christ (Apostolic). To use the phrase "born in church" would best describe my upbringing. My family was one of churchgoers, with my Mom singing in the choir and holding the position of an ordained church officer, so many of my early memories were of me being in church. Indeed I remember church being more that just a place we went to on Sundays, in fact we were there at different times throughout the week, every week, be it mid-week services, young peoples' meetings, choir practices and of course, equally important - church cleaning! But in all aspects, even at an early age, I began to see the importance of God in my life, and his presence and identity were interwoven with every experience, people we socialised with, friends I grew up with, activities that we were allowed to partake in, etc.

But of course I am not trying to depict my childhood as that of a saint, as there have been times which are common to every Christian's journey, in terms of wanting to "do my own thing" and in its broadest sense, rebelling against the established order, but I truly give God thanks for keeping me. Even throughout those times when I thought I knew best, and no matter what situation I found myself in, my church and my entire Christian experience was there as a safety net and I always seemed to end up back at home base. Proof of the fact that I am nothing without God and I can do nothing without him!

The church choirs were a big part of my upbringing. It was as if as soon as you could walk and talk, you were drafted into the choir. It was awesome - the choirs were like armies and we used to minister at local, district and national church services, programmes, concerts and other events at theatres and concert halls, etc. Yet the funny thing is that I was a shy child, and consequently I used to hate singing in public, and especially the solos - I hated singing them, I would even hide in the toilet during choir rehearsals to avoid being chosen! But I am very grateful for my upbringing as it has made me who I am today, and experiences like that cannot be bought!

Tony: There's another Sam Moore of course, the Sam of Sam & Dave who recently popped up on the London Community Gospel Choir's 'Abbey Road' album singing gospel. Did you consider changing your name when he did that?

Sam: No, not at all! I have always thought of the fact of us sharing the same name as a healthy association. As part of Sam & Dave and as a solo artist, the other Sam Moore has enjoyed a large degree of success and am just praying that I am favoured enough to carry on the prestigious baton of being a successful soloist called Sam Moore! Funnily enough, when LCGC released this album, a friend of mine called me to ask why I never told them that I was featured on the album. I told them that I wasn't me. this time.

Tony: How did you find it recording the album?

Sam: I have thoroughly enjoyed the recording process for my album. It has been hard work at times, but definitely worth it! I recorded a large part of my album in the States, which was a privilege and had been a long time desire of mine. I recorded in studios in Philadelphia and in Los Angeles. It was great working and bonding with the producers and engineers, and of course it's always such a blessing to hear the songs which God has given you come to life! Also, one of the good things about recording Stateside is that you are near all of that gorgeous American food..hmmm! I am now busy, back in the studio polishing up some of the tracks in preparation for the general release of the album which is scheduled to take place early March 2005.

Tony: What is the biggest gig you've played so far?

Sam: The biggest gig that I've done so far was back in February 2004 when I ministered at the West Angeles Cathedral, home of the Church Of God In Christ. This was to a collective audience of around 9,000 people. It was also "big" from the perspective that this was my US debut and that it took place at such a well known venue, and because of the fact that the congregation included the likes of Hollywood actress Angela Bassett and gospel recording artist, Kurt Carr! I was a little nervous, but once I was up on the platform I was okay - boy didn't those early choir rehearsals and performances pay off! It was a great start to 2004 and I look forward to bigger successes through Christ in 2005 and beyond!

For more on Samuel visit the Samuel artist profile