Mid-West singer/songwriter ANGELA JOSEPHINE is quizzed about her life and art by Tony Cummings.

Angela Josephine is an American singer, songwriter, artist and poet who has caught the ear of Cross Rhythms. Her two independent album have brought forth fulsome praise. About 'Restful Sense Of Urgency' (2004), Cross Rhythms wrote, "Angela Josephine shows herself to be a poetic songwriter able to pen songs that get under the shield of the post-modern muse with power and poignancy," while about her 'Grace Exhaled' (2006) CD CR wrote of Angela Josephine's music "shining with heart-baring honesty." With such impressive creative achievement, an interview with the Traverse City, Michigan singer/songwriter seemed overdue. Here are Angela Josephine's answer to my questions.

TC: I understand you grew up in the Mid-West. How did you become a Christian?

AJ: I always find this a difficult question to answer and it shouldn't be, right? I can't help but want to tell you my life story because I have trouble shortening things and trying to decide what was most important because I see God through it all. Like the Bible. God is there all throughout the Old Testament and there are these hints and prophecies of Jesus right up until he actually shows up. That's how I see him in my life.

Growing up in the Mid-West certainly contributed to my awareness of a Creator. In fact, I am writing this as I sit at the Falling Rock Cafe in my hometown of Munising. The side door is open and there is an awesome breeze rolling in off Lake Superior - I forgot how much I love that breeze! I performed across the street at the city dock just two nights ago. I sang out to the hills and all the people who came to see me - the little girl from Diaper Alley - grown up and returning home after 20 years. I am a different person now - a woman who has come to rely on Jesus - very different from the girl I was, yet still so much the same in so many ways. But I wondered if they knew I was different or if they were expecting the same person. I began by singing something a cappella that I felt compelled to write this week. "Oh the sky was so blue, that I gave my heart to you. Oh Munising. But you gave my heart back, said, "Fly free/But remember me/Fly free/And speak well of me/Fly free/Tell me what you see." It was a proclamation of the change in me - but also a confirmation that I am still so much the same and that they are very much a part of who I am.

I am thinking that a small town is a somewhat good analogy of God's grace.
Everybody knows everyone and everything about everyone. We have our share of scandals and disgrace, but in the end - grace wins and there is forgiveness and love. Of course, that is a flawed analogy - there's always someone who remembers or doesn't forgive. Scandal is hard to live down in a small town and I contributed my share while I was growing up and made a lot of choices that people make when they don't understand they are loved and accepted. In my early 20s after I left and went off to college, I bottomed out. I was a single parent and felt so totally alone. I was trying to fill up that space inside of me that was meant for God with everything else and that "everything else" just accentuated the emptiness. It wasn't until I understood that Jesus is the only one who can love perfectly, and has taken the repercussions of my scandal onto himself that I really was transformed. Everything after that became a response to what he did for me - or at least I would love to say I live in that awareness EVERY day. The truth is I am still so human and as such, muck up the grace of God. A perfect example is coming home to do this concert. I don't think I expected to come home and find love and acceptance. I don't know that I recognised how fully it was there until I wrote this.

TC: You're a poet as well as a singer. Tell me about the songwriting process. Is it words that always come first?

AJ: I'd say that it's more like I get a strong conviction or revelation about something and have to get it out. That's really what comes first and there is no rhyme or reason as to the words coming first or the words and melody together. Sometimes though, I can be at the piano (or any other instrument) and a song will 'find' me. I am playing and something strikes that proverbial chord and a song is born. One of the most interesting things about my songs is that I often find out what they are about after the fact. They are small self-fulfilling prophecies of a sort. Which would explain the 'need' to write them.

I have written on demand - but it's always been because I have a previous emotional attachment - a relationship - to the subject or the people I've written for. "Strength Of One", which is on my first album - 'A Restful Sense Of URGENCY', was a wedding song for my niece and her husband. I just wrote a song called "The Spirit Of Motherhood" that is going to be available with a coffee table book by Kansas City photographer Misty Woodward. It's a beautiful book of images of women throughout pregnancy and everyone should buy it! Misty just happens to be another of my many nieces so I can't help but plug her work, however, it truly is a labour of love and I think the song and the book will be very meaningful to many women. I'm beginning to think that my family alone could keep me producing new material for awhile! I really don't know what would happen if I were just flat out handed a subject to write about though.

TC: Although your latest album was recorded in Nashville, you seem very, very different from most CCM artists. What are your views on the whole Nashville industry thing?

AJ: I have a lot of friends in the industry or with ties to the industry and the general consensus is that the industry has changed in that they no longer 'grow' artists - but instead are looking for already established individuals with a marketable success record. The industry serves a defined niche and they are looking to fill a certain slot. I don't think that I fit the slots. That's okay with me.

I'm interested in being authentic and my art and music is a response to God in my life. I don't want or need to be like anybody else - although I admit that took me some time to learn and I have to remind myself from time to time. Bottom line is that I really need to be me in order for this to work and the people that relate to my music appreciate that. The independent route is good for me because I don't really want to conform to someone else's standards or what they've decided is worth hearing based on market research. It's not that I am closed to constructive criticism; it's just that I don't want to be a slave to someone else's expectations. (I've got enough of my own to live up to.)

TC: There are some very folk-orientated stuff on your album. Are you a big fan of early rural folk music?

AJ: You know, I couldn't name a lot of names - but if you asked me if I'd rather spend the day at a big Christian concert or a day at a folk festival - I'd definitely pick the latter. Some may think that means I don't like to worship but that is only if they've bought into a narrow definition of worship. I'm still perplexed by the notion of worship as something we go to and something that happens when Power Point goes smoothly and the band is tight. I don't know if that is the way it is in the UK or not? I mean, it's one way to worship - but it can also be detrimental if we think it's the only way and come to expect it to be that way. I just spent an afternoon weeding my mom's garden because she is getting on in years and can't do it anymore. I felt totally immersed in worship. And who says worship just happens when we are happy? David spent a lot of time in worship during his most unhappy moments. But back to folk music, I find such rich meaning in other people's stories. There is so much that God can teach us through each other.

TC: You do a cover of Joni Mitchell on your album. Presumably she is a major influence? 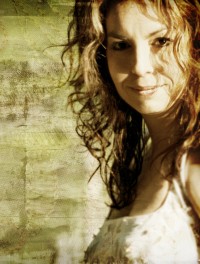 AJ: I always feel foolish admitting this - but I didn't even know who Joni Mitchell was until someone made that comparison! I did go out and buy 'Ladies Of The Canyon' after that and have come to love her music and her style. Honestly though and maybe it's because I am making music all the time, but when I have quiet time that is what I want - quiet. I often get a CD and listen to it once or twice. I've even been known to buy a CD I already have because I forget I have it! I am certain that I am absorbing something and that since the comparison was made, I've probably been influenced by the things I have heard from her.