'Daylight' by ANGELA JOSEPHINE has been six years in the waiting. It will be worth it, reports Tony Cummings. 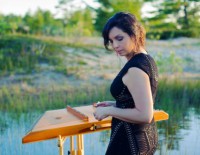 Cross Rhythms has long enthused about the haunting music of singer/songwriter Angela Josephine although we have struggled to classify her music. In 2002 her album 'A Restful Sense Of Urgency' was described as pop; her 2005 project 'Grace Exhaled' was classified MOR/Soft pop; while her 2012 EP 'Stone Bright Solid' was described as Roots/Acoustic. The one thing all the CR reviewers were agreed upon was that she has an exceptional talent, with everyone from Joni Mitchell, Tori Amos, Heidi Talbot and Laura Marling all being suggested as possible influences. Now with the long awaited new album by the Michigan-based singer finally scheduled for release on 4th May, there will no doubt be fresh suggestions by the music scribes wishing to pigeonhole this most elusive of talents.

The album 'Daylight' was recorded in Detroit and Ann Arbor, Michigan with producer Chris Bathgate and expands the sonic palette of Josephine's work as well as showcasing her on a variety of instruments (guitar, mandolin, hammered dulcimer, piano, Wurlitzer, organ, synth). From the cinematic prelude that is "This Light" (also the first single) to the haunting finale "Face To The Wind" an expansive landscape of wilderness unfolds with unexpected beauty and lush discovery. Seven years ago, Josephine first began the demos for this album after a season of care-giving and subsequent loss. She gravitated to her origins - the rugged landscape of Michigan's Upper Peninsula and her childhood hometown of Munising. She loaded her SUV and followed the pull north.

"There has been a kind of poetry in this journey," Josephine says. "I recorded the line in a demo, 'Seven years ago I saw the moon drop to the earth and in the darkness I saw pieces of the sky,' in my mom's pole barn literally seven years ago. Here I am today, and this lyric is underscored by the recent passing of my mother and the realization of a full-length album. Working again with Chris Bathgate (producer) allowed me to plumb the depths of my creativity and explore soundscapes that I've been drawn to."

"This Light" sets the stage for the narrative that plays throughout the album - self-exploration. "Every song furthers the arc of the woman in the story," Josephine explains. "Got To Believe" reveals a more inclusive world and will have one brushing off the vestiges of tired beliefs. Bathgate contributes vocals on the sultry powerhouse "Go Easy" which leaves one wondering if it is a break-up song or a song about identity.

"Daylight" is the most Americana folk song of the album. "We had the best time recording this!" she recalls. "We grabbed all these quirky instruments and just started to make noise. I stumbled upon the sweet little melody with bells that you'll hear in the chorus, and I will give a free album to the first person who can correctly identify what Chris is doing for the percussion throughout the song."

The instrumental "40 Days" takes the listener to a place of exile and the accompanying music video has Josephine on a windswept cliff in Northern Ireland while she plays hammered dulcimer against the backdrop of the North Channel. One gets the feeling that this is the turning point in the narrative, where struggle becomes empowerment, where Celtic folk becomes gritty folk-rock. "River Rising" is a haunting retelling of the story of Rahab, filled with round, beefy bass notes, fiddle and cyclic mandolin and drums. The album closes with "Face To The Wind", a reprise of "Stone Bright Solid", the title song from Josephine's 2012 EP that is a precursor and companion to this album. "I wanted a raw and vulnerable moment that highlights the message of the album - that in our brokenness we ultimately find life," Angela says. The cathartic joy found throughout the album is a validation that the darkness may, in fact, be daylight in disguise."