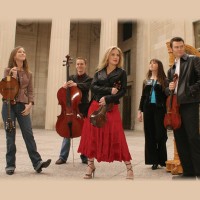 With Christmas music often being rock acts losing their way as they wimp out with Santa songs or over-the-hill crooners warbling on about open fires and chestnuts, 'This Glorious Christmas' by the Annie Moses Band (released this month through Integrity-Provident) stands like a beacon of creative integrity. With music sometimes labelled "chamber pop" - an amalgam of classical, jazz, pop, bluegrass and adult contemporary - the sibling group sing songs of the incarnation with spectacular originality. The group's Annie Wolaver spoke to CCM magazine about 'This Glorious Christmas'. "As a group we have always been drawn to concept projects, and a Christmas album is certainly the original concept project. In that way, I have found working on this Christmas music to be one of the most enjoyable, creative and, in many ways, easiest projects we have ever put together. The focus of the Christmas theme lends a simplicity that I find awe-inspiring, as we delve into the subject spiritually; and liberating, as we explore the wealth of sonic imagination the season offers."

The group is named after the great-grandmother of the five members that form the core of the group: Annie (lead vocals, violin), Alex (viola, background vocals), Benjamin (cello), Gretchen (violin, mandolin) and Camille (harp, keyboards). The precocious siblings handle their father's dazzling arrangements (Bill Wolaver composes, arranges and plays piano) under the watchful eye of Robin (mom) Wolaver, who is also a vocalist and lyricist with the group. If that wasn't sufficient, 10 year old Jeremiah also occasionally plays guitar with the band.

Annie Wolaver told christianpost website about the decision to honour their great grandmother in their band name. "Annie Moses was the eldest of 10 children. She married young and worked the whole course of her life as a hired field hand picking cotton. Despite the difficulties of an impoverished life, she was a tenacious and faithful woman who invested all she had in her daughter, Jane - who would grow up to be my grandmother. Jane was very musically gifted and she passed her passion for music on to my mother, who passed it on to me. Unfortunately Annie Moses died in her mid-40s of cancer, so I never knew her. But we wanted to remember and honour the legacy Annie Moses passed down to us."

While the Wolaver family were growing up, father Bill Wolaver worked for Word Records in Waco, Texas where he and his wife Robin wrote songs. They relocated to Nashville when Word moved there before finally settling in New York where three of the siblings, Annie, Benjamin and Alex, attended the famed Juilliard School Of Music. Said Annie, "Our time at Juilliard was one of tremendous growth. Juilliard is very competitive and you have to keep your eyes on the reason you are there in the first place, ie, the love of music. Alex and I studied with Masao Kawasaki, while Benjamin studied with Ardith and Ann Alton. They were all very demanding, but their depth of knowledge was at a level we had never experienced." 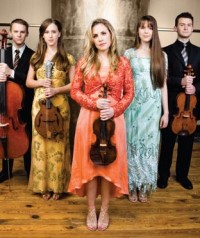 After completing their studies the Annie Moses Band came together. Remembered Annie, "The AMB was launched in the spring of 2002, but it was a long time in coming. We have been playing together since we were little. My father arranged pieces for us at our individual levels of skill. We performed quite a bit, but our focus was always our classical studies. In 2001 we started talking about beginning a group. We wanted to do something unique - that combined both our spiritual walk and our musical artistry."

Touring continually typically playing around 100 shows or more a year the group built up a large grassroots following, occasionally releasing albums on their own ManAlive Records. Two of these albums, 'Eden' (2004) and 'Bethlehem, House Of Bread' (2005) - a Christmas forerunner of 'This Glorious Christmas', got spasmodic distribution in the UK through ICC Records though largely it was their gruelling touring schedule which saw those albums and the later 'Always Morning Somewhere' (2006) and 'Through The Looking Glass' (2007) clocked up sizeable sales.

Through all their touring their Christian faith is pivotal to the band. Said Annie, "My parents and their heart for Jesus have always been a defining factor. But now my family life itself is what propels my spiritual growth. We pray and talk and read and talk some more - we have a run-on conversation with God and each other. We want to know even as we are fully known. I believe this constant state of connection has meant more to my personal growth than any other thing."

Now at last a big record company is taking the band's extraordinarily eclectic sound to a mass audience. On 'This Glorious Christmas' as well as standards like "We Three Kings" and "It Came Upon A Midnight Clear' there are originals like "Bethlehem, House Of Bread". Explained Annie, "The word 'Bethlehem' means 'house of bread' so the whole concept of the song is the great strategy of God in that Jesus would be born in the house of bread.

In the new year Reunion Records are set to release the Annie Moses Band's 'Make His Praise Glorious', the title track being a Bill and Robin Wolaver composition penned in 1988. One thing is sure, their music will continue to touch people of a wide range of ages and musical tastes. Said Annie, "We create music that speaks of how the Spirit of God touches our everyday experiences - whether it be through a generational legacy, the relationship between a father and a daughter, or simply stating the amazing nature of who God is."

I just watched a heart-warming concert by the Annie Moses Band on Middle East TV that has been broadcast throughout the Middle East. What a wonderful way to celebrate Christmas with such beautiful music. I was so blessed and thankful I got to see and hear this program. Thank you Annie Moses Band for the beautiful worship you offer to the Lord and share with us! Many blessings to you always from the land where it all began, Sarah

Annie Moses Band has become one of my new favorite groups. We spent the winter in south TX in 09 and drove 400 miles one way to see and hear them in person twice on a Sunday. It was worth every mile and would do it again. This is a group dedicated to God and to each other. I wish them the very best as they share their gifts, talents and dedication with the world. Being one of two Christian groups to perform in North Korea in spring os f009 is a crowning achievement. Can't wait to hear their reports of this experience. Love you Annie Moses Band.