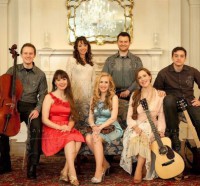 THE LONG established country team the Annie Moses Band have released 'What Every Child Should Know About God Vols I & II'. It is the second project from the Band's children's brand Tommy & Me which is described as "aimed at educating as well as entertaining children through art and music, the Tommy & Me line includes musical albums and a series of soon-to-be-released companion books." The albums were produced by Robin, Bill, Alex and Gretchen Wolaver and Annie Dupre at their brand new state-of-the-art ManAlive Studios in Franklin, Tennessee.