Anointed: The R&B gospel hitmaking group now reduced down to a duo 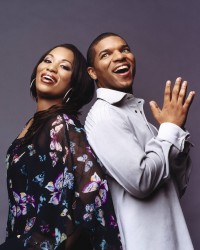 Mike: Is it weird being down to a two piece?

Da'dra: Yeah, definitely. We just kind of ended up where we started. At first, it was quite a transition. But, we've been like this for, wow, pretty much a year! So, we've been doing really well in just kind of getting back into the swing of things like they used to be. And, of course, being the brother and the sister, and the majority of the sounds of the Anointed, that's kind of still there, in a sense. So it's been a lot of fun, actually.

Mike: The theme of the album is prayer - tell me about that.

Da'dra: You know, what's interesting is that as we were working on the record, we were not intentionally trying to come up with a theme. We just noticed at the end of the recording process that we had a couple of songs on the record with the word "prayer" in them. And in addition, we noticed that in other songs, the theme of prayer was running throughout some of the verses and the lyrics. But additionally, just going through the transition that we've gone through as a ministry, we've actually been spending quite a bit of time in prayer, and just asking for the Lord's guidance. And so, now that I look back, it's quite natural that that theme emerged on the project.

Mike: Was there a time when you were praying, when you wondered whether God would call you to quit what you're doing?

Steve: Yeah! I mean, literally, most definitely. It's amazing when people say, "Lord, let your will be done." It's basically up to him. And so, we were like, ok, well, we know that the best place to be is to be in God's will. And if it is the time for us to stop, then there's already something on the other side for us. There is an awareness of the next level of our purposes. And so that's why we prayed. We went to the Creator of our lives and the Creator of our destiny, and he didn't say stop, he said keep going, so, that's why we're here, and he's with us. And we're glad about it.

Mike: Do you think that, because you spent lots of time seeking God, that it means you've come back stronger than before?

Da'dra: Yeah, I think in some ways, we have come back stronger because there is a sense of assurance - we are very certain that we are doing exactly what we're supposed to be doing. And that always helps because whenever you face any new challenge, you have a stability, you have an anchor, because you know you are right where God wants you to be. And because of that, everything is going to fall in place, and work out for your good. So it's always important, I think, to really seek God, to make sure that you are right on target, and if you're not sure, wait until He makes it clear to you, and then, and only then, make the move.

Mike: What are your ministry goals?

Da'dra: Well, some of our goals, we have carried on that we have still yet to do. And one them, of course, we're going to expand our international outreach. That's very important to us. We're also working on getting something going in the area of book publishing, to get something out in that form. We're also wanting to do more of a type of workshop situation, where we actually, not just sing, but have a time where we actually talk and teach about what it's like to be in music ministry, and help, and hopefully inspire some other people in that way. We also are kind of broadening our ministry; we're going into the whole movie area.

Mike: We read in the Bible about how Jesus used siblings to go and minister, tell me about your reflections on working and ministering together, and your relationship as a brother and sister.

Steve: Well, we've been singing together a long time, actually years and years before Anointed was ever formed. We love each other; growing up, we weren't allowed to have any confusion in our relationship. We were taught how to love each other, and how to respect each other, and that continues today, musically, in our ministry. We recognise that God uses us differently, but for His particular purpose, and His call, and we need each other.