Anointed: The brother and sister duo speak about their music

In Nashville Mike Rimmer met up with two crossover gospel veterans from Columbus, Ohio who go by the name ANOINTED. 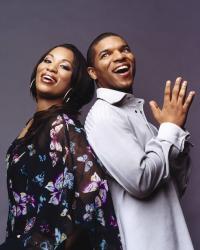 In the '90s, Columbus, Ohio's Anointed were a major force in gospel music with their blend of gospel, R&B and pop making for some infectious album releases. They won awards, sold piles of CDs and occasionally crossed over to the mainstream. They also shrank. From a four-piece who made their debut album 'Spiritual Love Affair' in 1993, these days they have halved to brother/sister duo Steve Crawford and Da'dra Crawford-Greathouse.

The pair have been singing with their siblings since they were kids so it feels as though there is a natural cycle to bring it back to where there is just the pair of them working together. It might have been easy to let Anointed die after their record label Word dropped them after the woefully under-promoted 'If We Pray' album in 2001. However Da'dra says they had other ideas. "All these years we've done what we've done and God has graced us. But I think now more than ever we're just really determined to just see this through all the way to the end." She explains, "We've always felt that way but now we have such a passion for the music we're doing now, which has reclaimed the gospel audience that came with us during 'The Call' record."

The new album 'Now Is The Time' does see the group going back to their gospel roots without losing some of the poppier influences that have always characterised their music. Da'dra shares, "There are still some songs in there for the fans we gained along the way through the contemporary Christian music community. We've sort of tried to bring all those people together. We've always wanted people to really be encouraged and inspired by the music that we do and we want to see that more so now than ever before."

There's certainly plenty to inspire on the album including a song that Da'dra wrote in her sleep! "I was taking a nap on Sunday afternoon," she remembers. "I was very tired! I didn't intend to take a nap but I did that particular day. As I was waking up I heard this chorus in my sleep and it was so loud and I heard all the parts and I heard all the instrumentation. I could feel the rhythm, the pulse of it. I woke up and I was scrambling trying to find a tape recorder and a pen and a piece of paper to get it down! I called my brother and said, 'I need a verse and a bridge because I've got the chorus and it's in my head!' And so that's how we came up with 'Gonna Lift Your Name On High'. We really didn't write that chorus, God just let me hear it."

If only all song writing were that easy! Da'dra laughs, "I wish it happened that way for all the songs on the record!" Mind you, just writing songs the natural way has paid dividends too as the album is bursting with fine tracks including the infectious groove of "Mighty Long Way" and the gorgeous "Eternal Life". There is something about the way that male and female lead vocals interplay on the album that is reminiscent of BeBe and CeCe Winans. One of the absolute highlights is the re-working of the classic Andrae Crouch song "Jesus Is Lord" which features Andrae trading vocals with the pair.

It's a pretty audacious move to re-record the song but they have treated it with some reverence, staying with the song's original feel. "It is a classic, most definitely!" admits Steve, "and as a matter of fact, we didn't want to take it too far away from the original version, which is why we didn't programme a whole bunch of stuff and try to make it hip-hop!" So did Andrae show up to sing on it to make sure that Anointed didn't murder the song? They both laugh and Da'dra scolds me, "That is so not true Mike!"

Having recorded their own arrangement of the song, they invited Andrae to sing on the item. Steve remembers, "When he heard it he was so excited and was asking, 'Who's singin' in the background?! Who did the music?! Who did the horns?!' And we're like, 'Uhmmm, us!' And he was like, 'Ooooh dat's nice, dat's nice. I like that!' So we were excited."

Steve continues, "He is very, very funny but his love for music just flows from him. He's a pastor now and also he's had some health challenges over the years. So he's not been in the best of health and that's probably contributed greatly to the raspiness of his voice these days." Raspiness or not, the track is a classic and the album is a real return to form. Anointed are back and gospel music is richer because of their return!