Anointed: The gospel foursome with a fresh musical approach to the old, old story.

A hot album and the praise of their peers. Now Greenbelt beckons for ANOINTED. Tony Cummings reports. 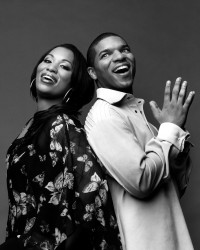 Under the Anointing: Anointed

At the first gig for Anointed after the completion of their debut album a veritable who's who of R&B gospel including Take 6 and BeBe And CeCe Winans, turned up to party and praise the Lord. For the buzz on the streets is undeniable, Anointed have the chops to make it all the way to the top with their slick, soulful brand of contemporary gospel. Greenbelters will have an opportunity to judge for themselves when this still wet-behind-the-ears team (their ages range from 19 to 23) from Columbus, Ohio play the fest. The glint of glittering showbiz prizes weren't always the group's. Denise "Nee-C" Walls, Mary Tiller, Steve Crawford and Da'Dra Crawford grew up far from easy street.

"We all come from single parent homes," explained Mary to America's CCM magazine. "Coming from single parent homes we lacked experiencing the relationship between a mother and father during difficult periods in our lives. Being in the group, dealing with Steve, Da'Dra and Nee-C, all of our different backgrounds and personalities compensated for that missing family link." "To add to that," jumped in Da'Dra, "we survived growing up in that type of environment. And now, because we've been blessed to be successful regardless of what our past was like, we want to encourage other young people by saying, 'Hey, you can make it too.'"

All four of the group are individual songwriters. Was it a difficult task in deciding on the songs for their album debut 'Spiritual Love Affair'? Weren't there plenty of artistic tantrums? "That's not the case with us," responded Steve. "First, when you look at our name. Anointed, it means 'to be blessed and favoured by God'. And we've definitely been blessed with talents which we thank God for. Secondly, regarding how we put songs together, we write individually. What we do, we present the idea of the song to the group. The song is not complete until everyone has contributed to it. That helps us to create Anointed, our sound, our style."

It's a sound which has found immediate acceptance. After backing up Vickie Winans on The Lady' album, the group came to the attention of Word Inc. 'Spiritual Love Affair' was produced by Vickie Winans' son Mario 'Skeeter' Winans and Commissioned's Eddie Howard. The band is full of hip R&B rhythms. Swingbeat groovers will go for "God's Personality" while "The Other Side" is, in the words of one reviewer, "the slinkiest slice of funk this side of Mary J Blige". But it is the ballads which are Anointed's real forte. Though several songs use the kind of God-is-love double entendre gospel purists wince at, Anointed's balladry is class personified. "Love Me (The Way You Do)" has a soul/jazz feel ala Brian McKnight while "You're The Reason" and "Dreams", though a little overproduced, will thrill devotees of the soul ballad. Already Word/Epic are picking up good radio play on 'Spiritual Love Affair' and all manner of crossover success is being predicted. For their part, Anointed see their main role as being good examples to today's youth. "One of the things that's lacking today are good role models for our young people," said Steve. "We just want to contribute by saying 'Hey, we've gone through it and with God, you can make it through anything.'"