Arvo Part: The Estonian composer exploring the sound of silence

In The Living Composers Society series John Irvine looks at the life and works of Estonia's most acclaimed composer ARVO PART. 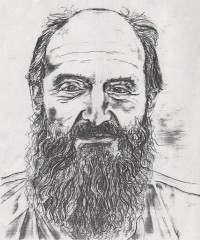 Estonia is a small Baltic state with a fierce pride in its long history of independence, a powerful religious heritage, and a strong anti-Russian stance. Stalin annexed the country to the Soviet Union in 1940 and it was not to gain its freedom again for another 50 years. Such was the country that Arvo Part grew up in. Although his family were not particularly religious, Part questioned communist indoctrination during his formative years and came to develop a profound religious faith, a faith which found freedom of expression after he emigrated to the West in 1980.

In the 1960s Part worked for Estonian radio and television as a sound engineer. He also composed - both serious pieces and work for films. Along with other members of the avant garde he fell foul of the Soviet authorities by employing 'Western' 12-note serialist techniques into his music. This style dominated his early works up to around 1966 when he developed a style of composition called 'collage-technique': "My collages were an attempt to replant a flower in alien surroundings," he said. In 'Credo' Part 'samples' a Prelude by Bach and then develops and distorts the piece into the realms of chaos. Order and harmony are re-established by returning to the original 'sample'.

Exposure to Russian Orthodox chants led Part to develop a new style, after an intensive period of study of medieval and renaissance music. The result was the Third Symphony. Part described it as "a joyful piece of music..but not yet the end of my despair and search." A five-year silence ensued after which Part emerged in 1976 with a completely new style - 'tintinnabulation' or 'the sound of bells', a style which Part has remained completely satisfied with. It uses the simplest of materials: a single note, a tried, a chord, simple phrases repeated at different speeds creating overlapping and slowly shifting patterns, as can be heard in his famous "Cantus". Alongside this, Part has developed a philosophy of music, believing that music begins and ends in silence: one should only compose or speak or make music when one has something to add to the silence.

Part has often stated that in his vocal works it is the words which write the music, with the number of syllables in a phrase governing the shape of the music. This technique is similar to the medieval practice of 'cantillation' or the singing of sacred texts. In Part's music, the text becomes the cornerstone of the music and no attempt is made to amplify or illustrate the text through colour or tone of a musical setting, as can be heard in "Passio", a 75-minute setting of John chapters 20 and 21. It is an immensely static, ritualistic piece where the music supports but does not add to the text. There is no drama, just simple music -music which is nevertheless beautiful and powerful. A similar style is adopted in "Miserere", but more warmth and depth is created by phrases of music in between verses. "Stabat Mater", similarly, is music created by the words of the medieval poem. The melody almost droops under the weight of the words it carries. A synthesis is achieved between text and tone which is extremely moving and would be powerful in a worship setting if the Latin text were not a problem.

If the vocal works are based on the text to such an extent that it determines the length and even the pitch of the notes, then the instrumental works start from an even simpler premise: a single note. The instrumentation of these pieces is often sparse, with much repetition of phrases. For example, "Fratres" possesses a melody which always returns to the same still tonal centre. A single note becomes a chord, which develops and unfolds returning to the same single note. "Here am I alone with silence: it is enough when a single note is beautifully played." Part uses 'few notes with much repetition', but Part's few notes are intimately and infinitely expressive.

Commentators have often remarked on the 'necessary' quality of part's music: it is sparse and simple, no wasted notes, no superfluous parts or gestures. One critic even believed this to have been a sign that Part devoted his life to profound prayer! Perhaps he does, but he refuses to be drawn into any detail about his personal life. An interviewer asked him about influences and compositional technique and part talked about God, but when asked how specifically his Orthodox faith had affected his music, he bluntly replied, "Religion affects everything, not just music." Faith is a serious and personal matter for Part. His music is not so much religious as part of his religion.

Part's music is not that of religious comfort, however: it is austere music, serious and full of suffering. As one writer put it, Part's music proceeds from the spirit of Lent. The 20th century has suffered on an unprecedented scale. Part's music does not only reflect the suffering of biblical persons - it reflects the suffering of 20th century man also. Suffering is reflected, but Part also points the way to peace and resolution of conflict in God. It is not an easy path to God - there will still be suffering, but in the end relief and release from pain.

Part has more in common with medieval and renaissance composers than with his contemporaries since his music has an anonymous quality. The 19th century Romantic movement left the legacy that the composer must make a statement about himself, express himself, fill his work with himself, as an extension of his personality. Part's humility will not permit this. All of his works have a devotional character. They are empty of Arvo Part, but full of grace and truth. They are vessels through which a truth beyond words can be grasped. "I could compare my music to white light which contains all colours. Only a prism can divide the colours and make them appear. This prism could be the spirit of the listener."

In short, therefore, there is little to be said about Part or his music. It is better that one should listen to it for one's self...