As If: Phil Goss and friends determined to cross the Chemical Brothers with Pink Floyd

AS IF's lead singer and composer Phil Goss was quizzed by Ian Boughton about the band's internet-derived songs. 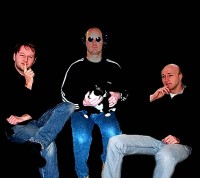 Ian: There are lots of intriguing songs on 'In Full Bloom'. Tell me about "Winter".

Phil: The idea behind it is SAD, the Seasonally-Affected Disorder that affects so many people who see winter as a time of bleakness. But under the surface, things are alive and getting ready for Spring. Is this the way that God works? In the Bible, Job faced this kind of bleakness, but God understood. We give a link to a SAD website to see what they say about the causes of it."

Phil: In the 1960s a film maker from the States heard the story and decided to make a film about it. In the end, he decided to turn it into a space adventure... but he kept the minister's name, which was Kirk. The story became Star Trek! The theme is gossip - it's so easy to get the wrong end of the stick and spread the wrong story around. There are Biblical texts about it. Having said that, we noticed when we were in Aberfoyle that the hill where the man walked was covered in mushrooms and toadstools. Of course, if people had been eating them, that might explain why they started seeing fairies!

Ian: The song "Summer Never" talks about how the Church loses whole generations by not reaching out to youth.

Phil: It's a strong lyric and something which needs to be said - we're in the 21st century and the Church is still scared of reaching out. And it will never be summer if we don't do something about the barrier between youth and the Church. This song links to a fascinating but scary website which shows the real statistics of how much youth is being lost to the Church, particularly the Church Of England.

Ian: And the song "Babel.com" seems to be a warning about the internet.

Phil: This is a song about the dangers of dependence. I have an idea that it is too easy to lose sight of what is real - as computer simulation gets better, reality gets weaker.

For more on As If... visit the As If... artist profile