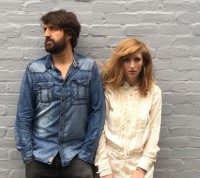 The recent single "Breathe You In" by Ashton Lane has been playing on Cross Rhythms radio. This husband and wife duo won't be entirely unfamiliar to Cross Rhythms readers. In fact back in 2008 we wrote about Esther O'Connor, one half of Ashton Lane, under the heading "the Scottish singer/songwriter with a hard to classify style." Now that style has been well-and-truly labelled. "Country" is what critics and fans have decided best suits the music emanating from Esther and husband Tim. Last year Ashton Lane performed at the famed Country To Country festival in London and they have received nominations in two categories (best duo and best song) from the British Country Music Awards. Clearly the time has come to catch up on the hard working Glasgow-based duo and here's what Esther told me.

Tony: Tell me a bit about the single' "Breathe You In". How did that song come about?

Esther: Sometimes we do writing sessions with different folk and this song has an interesting story because we wrote it with a girl from America, she lives in Nashville now, Jacqueline Platt. We knew the folks who are connected to her music and we offered to do some songwriting. So we write a song around some story or idea or lyric. Jacqueline had always wanted to try her hand at songwriting so we came up with the idea of the song together and then as a band we wrote the song and kind of really brought it to life and it turned out to be a really brilliant song, one of our favourites and one that we went on to choose as a single which came out on 27th October. It's a song that means a lot to us. I think sometimes you sort of crave getting out of the city and getting somewhere where you can really connect again and find that quiet place, think clearly and breathe a little bit more deeply.

Tony: It's interesting because you're a big city girl yourself. You haven't got a rural background have you?

Esther: No, I don't. We live in a very, very busy part of Glasgow so I think it's all the more important to take those times out. Glasgow is cool because within 30 or 40 minutes you're out by the lochs and by the mountains. You can go for these amazing walks by Loch Lomond; you're in the middle of nowhere. So I kind of love Glasgow for that, cos it doesn't take long to get out and we do that a lot as a family. I've got two young kids and we like to head for the hills.

Tony: Back in 2008 when you were recording as Esther O'Connor we began an article saying the critics around were trying to label your style naming acts like Suzanne Vega, Sheryl Crow, KT Tunstall. How does the label "country" sit with you guys?

Esther: To be honest, I think a lot of those influences that you've mentioned, for example Sheryl Crow, there's a real country, Americana sound to it. I was brought up very influenced by Americana music and a lot of strong singer/songwriters so that's where I began my journey. I think the development into pop country has been an interesting one because things haven't really changed. The music I've done has stayed pretty much the same in lots of ways. When Tim and I went to Nashville in 2010 it was like finding a musical home because that's the music that I'd been writing and I think in the UK, when you say country music, many people thing old school country and western. But that isn't what country music is now. That's an element of it but most of the country music scene is modern pop country, which is pretty much what I'd always been doing: a singer/songwriter with an Americana influence which is there in my music today.

Tony: Did Ashton Lane begin when you married Tim? Was that the start of the group?

Esther: Tim and I began making music and gigging shortly after we got married. Originally it was under Esther O'Connor simply because before I met him I'd been gigging as a solo performer, under my own name. When we got married it was just a natural progression. When we went to Nashville in 2010 we were still promoted under Esther O'Connor. At that time it was myself, Tim and my brother Jamie. So we decided to take a band's name to reflect the fact that it was a group. Ashton Lane was the name of a band that I had had since my late teens and we always liked the name so we just kept it.

Tony: Is there actually a street called Ashton Lane?

Esther: Yes, there is, a little lane in the west end of Glasgow.

Tony: Presumably, there are some photos of you standing there?

Esther: No, we don't have any photos of us in Ashton Lane but there are lots of nice little gig venues there, it's kind of a cool place. Tim and I spend a lot of time there; we've played quite a lot of gigs in Ashton Lane so it seemed like a natural name for the band.