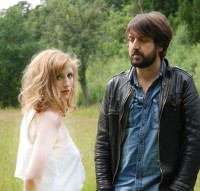 Esther: We released those albums very close together. We released 'Nashville Heart' about two months before I had my second child - the album was released in November and my baby was born in the January. 'Count The Stars' was a couple of months after that. It was like a partner album effectively to 'Nashville Heart' because there were so many songs for 'Nashville Heart' that we couldn't choose. It was already quite a long album and we had so many songs we'd written that we loved so we put out 'Count The Stars'. It was kind of a Christmas album, it came out around Christmas and I had a couple of Christmas songs on it.

Tony: Where were all those recordings made?

Esther: They were all made at the Foundry Music Lab, just outside Glasgow, in Motherwell, which is run by my dad, Graeme Duffin.

Tony: Was it difficult working in a studio where your Dad's there all the time?

Esther: No, not at all. We've worked together since I started recording music. I don't think there's anybody I would feel more comfortable recording with.

Tony: When you do gigs with a full band, your dad's there sometimes isn't he?

Tony: Do you find the audience for your music changing?

Esther: Yes, and it's interesting when you see the people who come along. When we played at Buckle And Boots Festival and Country To Country there were so many young people and I was quite surprised at that. I almost think of it as being adult contemporary music and I was really surprised at the number of really young folk, like young teenagers and older teenagers who were at these festivals. It's something the festival organizers are astonished about as well. It's good to see.

Tony: How much does your faith inform your music? Are there songs in your set which are specifically Christian message songs?

Esther: There are. We don't do it in a way that's contrived at all, if you know what I mean. We don't think we'd better try a couple of Christian songs for any particular reason other than it's a natural part of who we are. It comes out in our songs. And our albums are mixed. Some songs talk about faith, only because that's a natural part of who we are, but then other songs talk about relationships and some songs are based on stories that happened to me or other people. It's a big mix, just like the way life is, I suppose. And that's another thing I like about country music: it's quite a natural genre. You have the country gospel type stuff as well. It's a natural genre to speak about your faith and it kind of fits stylistically as well. It makes sense. So it's nice to be doing that kind of music because you can easily write about your faith in it.

Esther: Yes, it's an EP called 'Winter Star'. There are two original Christmas songs and two acoustic Christmas covers. One is a version of the hymn "Who Come This Night". We'll do a few fan concerts where we play for people in their living rooms and we often do them around Christmas time. They are really nice. It's a nice opportunity to get your neighbours and friends in and if we do them around Christmas we do a few Christmas songs and a couple of our own sets, drink some mulled wine, have a mince pie.