B David: The gospel worship artist who's left the gay life behind 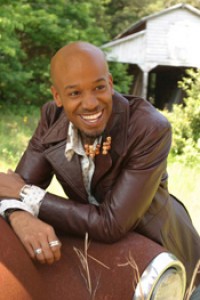 Atlanta-based gospel worship artist B David recently had his national debut album released Stateside. It has gained considerable praise from the critics though it's the singer's dramatic testimony and how God's love has delivered him from a gay lifestyle which has gained the most attention from the media.

Born in Jacksonville, North Carolina, B David had to show survival skills at a very early age. "My parents divorced when I was two years old," explained B David. "Emotionally I don't think my mom was in a position to take me, so I lived with my dad." His father remarried within six months of the divorce and B David's stepmother eventually became abusive, both physically and emotionally. As he told CCM Buzz, "I can remember mistreatment from when I was just six years old." While the stepmother's abuse continued, B David started encountering additional abuse from a cousin when he was about eight years old. Due to his parents' work schedules, B David was dropped off at his uncle's house after school where his cousin routinely groped him and coerced him into oral sex.

"I don't remember a time when something didn't happen between me and my cousin," B David told Christianity Today magazine, recalling the harrowing scenes of sexual abuse that lasted for three years. "I remember thinking, Should I tell somebody? But I was afraid of what my parents might do to me, and I was also afraid of my cousin. I would say to myself, When I'm 15, I'm gonna run away. When I'm 14, I'm gonna run away. When I'm 13. . . I was plotting, [but] after awhile, I just got used to it."

Eventually, B David got away from that situation and moved in with his mother. But with strings of boyfriends and an impending third marriage, the environment with his mother was only marginally more healthy. Rather than devise another plan to run away, B David discovered an alternative outlet for escape via his stepfather's stash of pornographic tapes, exposing the impressionable teen to the powerful vices of lust. Before long, B David began experimenting sexually with other men. "I don't recall when gay feelings started. I just know they were enhanced through the sexual abuse," he said. "When you're a child, those things are really traumatic. I didn't understand the weight of it all. In a sense, I felt like maybe this is what I'm supposed to do."

Somehow, in the middle of such volatility, music had entered B David's life. "It was my stepmom who was the first person who introduced me to music, so our relationship was even more complicated, because she did some really good things for me along with the bad." B David began singing in talent shows, participating in a church choir and other musical activities by the time he entered his teenage years. At the age of 15, B David met a cute girl at school who invited him to her church. "I was invited by this girl because I could sing," he remembered. "Really at this point in my life I started a relationship with church, but not with God. I was still sleeping with guys and still entrenched in an alternative lifestyle, even though there was some interest in this female friend of mine. Then something happened. One night I went home after singing at church and I turned on the television. Reverend Jimmy Swarggart was on the screen and giving the call to Christ. I was overwhelmed with God's love at that very moment so I dropped to my knees and offered my life to Jesus Christ."

There is, of course, considerable irony that it was televangelist Swaggart who was instrumental in B David's conversion as the preacher was later to become embroiled in a lurid sex scandal. But B David's conversion was real enough. "I felt dramatically different," he said. "I felt like something had broken and changed in my life." B David doesn't remember hearing from the pulpit that homosexuality was wrong. He just knew his heart was discerning that opinion. "I believe it was the Holy Spirit," he said, thinking back to those first years as a Christian. And though B David admits his attraction to the same sex did not change, his behaviour did. "From the time I [accepted Christ] until I was about nineteen, I had a God-consciousness. I lived my life studying God's Word and at church most of the time," he remembered. "I knew [sex with men] was wrong. So I stood apart from it as much as I could."

For the first two years of college, his spiritual awakening continued, his mind and schedule occupied with a plethora of ministry-oriented projects. But his internal conflict didn't die, and during his junior year of college B David resumed having gay sex while employed as a worship leader at a local church. "I remember being with a person the night before, then coming to church and seeing people really being blessed, God really moving, and me feeling horrible." Unable to continue in dualism, B David confessed his indiscretions to a close friend who encouraged him to talk openly about his struggles with his pastor. "I was like, No, no, no. I cannot do that." But he did. And with the holiday season looming and his church workload increasing, his pastor offered the emotionally exhausted worship leader some much-needed time off.

"It was like, God I don't know what to do. I just don't want this in my life. So I fasted for 40 days. I was crying out to God, What's the deal? I was desperate. At the end of the 40 days, my feelings hadn't changed." He was disappointed. And hungry. Weighing a frail 125 pounds, he made his way down to the dorm kitchen. And that's when he noticed a change. "I saw this girl and she was so attractive to me," he remembered. "I was like, Wow, what is this feeling? I had never been attracted to women at all. At that moment I knew something had altered and changed in my life - an attraction to women was developed somehow."

Returning to his dorm room to ponder his dramatic shift in desires, he thought of his best friend Debbie, and almost immediately he knew, "She's the one for me. It was the weirdest thing. I attribute it to God, because it just didn't make sense." Taking the trip to Atlanta to surprise her with the good news, Debbie didn't reciprocate in kind. "She didn't talk to me for eight months," B David recalled. But "I fell in love with her. I kept believing, God, she's definitely the one for me." B David and Debbie were married in 2000.

B David began leading praise and worship at Koinonia Christian Centre in North Carolina. That's where he met Bryan Crute of New Generation Campus Ministries and there was an instant spiritual connection. When Crute moved to Atlanta to plant a new church, B David knew that he was soon to follow after graduation. The church began with 30 people and today, Destiny Metropolitan Worship Church in Marietta, Georgia, has a congregation of 6,000 members. B David is now the worship team director and is also a member of the group Destiny Praise, which is part of the church's record label. B David's first recording was with Destiny Praise on the album 'Driven'. B David also received some well deserved recognition when "Come Fill My Heart", one of the songs he wrote for another project, was picked up by CeCe Winans. She recorded the song for her album 'Throne Room'.

B David's 'Life Journal' was released in June in the US. All but two of the 11 tracks on the album were written or co-written by B David. The songwriter/producer Travon Potts collaborated with B David on three songs for the new CD. "Travon knew my whole story and understood the message that I was trying to get out," commented B David. The first single from the project, "Believe", has an upbeat groove and a powerfully soulful vocal from the singer while "Dominate" encourages listeners to let God take control. B David said about his album, ""It's very introspective. However, people will be able to see their own lives in this music. The main messages are forgiveness, release, hope, and freedom."

Today B David lives in Atlanta with Debbie and their three children Madison (aged eight), Dylan-Nicole (five) and Jude (two). The worship leader has come to terms with the notoriety his testimony may bring him. He spoke abut the challenge when he first gave his testimony at Destiny Metropolitan Worship Church. "I remember thinking, I'm starting to tell my testimony. People are really going to know who I am and what I am dealing with. But I have to be willing to [share my testimony] because my heart is for people to be free. My heart is for people to get more of God."

B David understands how unpopular his story may be in a society that more and more believes that any sexual preference is okay. But he also realises the way we feel often deters us from recognising what is foundationally true. "We can't say, 'God wanted me to be this way,' because that's not necessarily true," he said. "We can't blame it on him. When people come from the mindset, 'There's nothing wrong with what I'm doing, and God loves me,' I know what they're trying to say. But sin is sin. Trust your relationship with the Holy Spirit. Are you in the Word? Are you really spending time with God? There are limits God has placed for us to abide by."

Having heard the stories of other committed Christians with similar conflicts, B David realises he does not struggle alone. He believes he has a responsibility to encourage others through his own process of faith and healing, a process he admits will not be completed in this lifetime. "I think the world is saying, 'You cannot change who you are.' But God is the one who changes hearts. If I'm 80 years old and these feelings never go away, so be it. I have nothing to do with that. I just choose to believe God knows what he is talking about and he knows what he is doing."

Fantastic article. It's great to hear about someone like B. who suffered so much at the hands of his family yet didn't use it as a crutch to lean on or as a stick to beat himself with. The church tends to shy away from dealing with the "gay" issue, but this article should be an encouragement to us all. Thanks Tony for the report.

For more on B David visit the B David artist profile